Doctor Earl Serrano was the Sovereign Colonies leading scientist on Tau Volantis in 2311. Throughout the events of Dead Space 3, many logs of Serrano's research could be discovered. They often depicted Serrano's fascination and excitement about his research. These logs also gave background information of the planet known as Tau Volantis and the alien species that lived there.

In 2314, he led Privates Tim Caufman and Sam Ackerman to the crashed ship where the Codex was, contacting him several times. When Caufman made it back to base, however, everyone was dead and Serrano's whereabouts unknown.

Serrano's body and final recorded message could later be found within the chamber leading up to the Alien Machine.[2] It was possible that he died from either exposure (Elizabeth Atwood mentioned that her crew required a portable heating unit to keep warm), dehydration or from succumbing to his wounded leg if the infection set in.

"Good afternoon, General. Admiral Graves asked me to prepare this information for you. (clears throat) When the Black Marker was exhumed on the Earth in 2214, it defied our understanding of science. It appeared to generate limitless energy - a trait of obvious importance in our resource-strapped times. There was an effort to replicate the Marker, hoping to understand it's technology, thereby acquiring limitless energy for ourselves. Imagine our surprise when we learned they are not sources of energy but receivers of it, via carrier wave from somewhere deep in space. Triangulating this "Marker Signal", revealed a previously undetected planet, now known as Tau Volantis. We hope to find the source of this signal, and finally harness that energy for ourselves. And if this works, it could mean a better future - for all of us. General, thank you for your time."
—Dr. Earl Serrano

"The misshapen Moon in orbit... that's what controls the Markers. It's the end-state of these creatures... or rather, it would've been. You see, the natives of this planet constructed a Machine that froze the Moon in mid-formation. But it wasn't enough. Even half-formed, the Moon's "Marker Signal" speaks to the Markers back home. And it does't end there. There is a network of "Brethren" Moons spanning the stars. As each one completes, it connects to this network, making them aware. If this Moon should complete, it's brothers will all come - looking for food. But there is hope! The natives never finished configuring the Machine. It wasn't meant to merely freeze the Moon-it was meant to destroy it! You'll need the Codex. It is the key to unlocking this Machine and re-configuring it! Follow my trail into the heart of the Machine and end this nightmare."
—Dr. Earl Serrano

"If you've made it this far, you are now deep in the heart of the Machine. From here, there appear to be two primary configuration points - one to the west that you have no doubt already activated and another to the North. If they can all be properly composed - well, to be honest, I don't exactly know what will happen. The only advice I can offer is this: be observant, The clues are out there."
—Dr. Earl Serrano

Serrano's Messages To Tim And Sam[]

Jesus, Caufman! This is hopeless!"
"Alpha Niner, this is Whiskey-Two-Five-Zero, Alpha Niner! This is Whiskey-Two-Five-Zero. Serrano, do you read me?"
"Tim? Oh thank God! Did you find it?"
"Find it? Doc, I'm not even sure what we're looking for!"
"Just... Follow the waypoint I sent you! I... I can't tell you anymore, Just get there, soon! Do you hear me? You have to get there or all is lost!"
"Wha.. Wa... Dang it!"
"Follow the waypoint? We've been following it for hours and ain't found squat!"...

"Tim! Tim! Where are you?"
"Hey Doc, I'm... I'm hanging' from a cliff, But I got... Whatever this is!"
"The Codex! It's the key to saving everything! Meet me at the silo and don't stop for anyone!|Dr. Earl Serrano. Tim Caufman. Sam Ackerman.

"Argh! Well, I’ve gone and busted my knee open. I suppose the Codex is in Mahad’s hands by now, and this place is about to be buried, like everywhere else. (chuckles) I remember telling my college professor I wanted to study xenoarcheology. He laughed right in my face. 'There’s nothing to study,' he said. 'It’s all dead space. No alien life exists out in the universe.' In a way, I guess he was right. There is no life beyond our system, only a trail of extinction, brought by the Moons. And now it’s right on our doorstep. Well, above us lies the means of turning off the Machine, but also the means to complete it. Turning it off will finish our species, completing it will save us. I had hoped to be here to witness the saving part. It would have been spectacular to witness the Moon getting pulled into the planet and crushed to oblivion - a final act by the natives - a sacrifice to save us all. But now, I must rest. Perhaps Tim will be along soon with the Codex."
—Dr. Earl Serrano 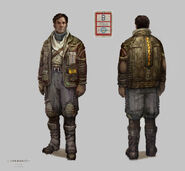