(possibly other stations and planets).

The Earth Government Colonial Alliance,[1] known also as Earth Government and EarthGov, is the executive branch of Earth and its colonies, responsible for administrating the territories that officially fall under its control.

The Earth Defense Force is the military wing of Earth Government.

The earliest form of the organization began with the creation of several separate "Sectors" of administration based on national, geopolitical and geographical considerations to every region on Earth, some time prior to or during the start of the 23rd century.[2][3][4]

In the wake of mankind's expansion to space, the Sovereign Colonies administration was formed as the united ruling body encompassing Earth and its colonies. This expansion occurred after a string of global social calamities caused by post-21st century armed conflicts, specifically the Bering Sea conflict, and environmental catastrophes known collectively as the Global Warming Epidemic.[5][6]

At the start of the 24th century, dissatisfaction with the Sovereign Colonies compounded by the ongoing resource crisis led to the Secession War, which pitted the Colonies against Secessionists seeking to replace them with an Earth-centric government. The Secession War raged on for years, with the Sovereign Colonies gradually forced into the defensive by Secessionist-inflicted material losses and dwindling public support and later, due to Scenario Five, the total collapse of any coherent military command. The covert expedition to Tau Volantis in 2311 was an attempt to turn the tide of the war by securing limitless energy provided by the Markers.[7] However, the Sovereign Colonies discovered that in doing so, they created an extinction-level threat to humanity and the Colonies' governing council invoked Scenario Five: The destruction of all research and personnel related to the Marker research. The extent of the purges nullified their ability to continue the war and the Secessionists emerged victorious, dismantling the Colonies and founding the new government across all of human space: Earth Government Colonial Alliance.[8]

Scenario Five was kept confidential and all evidence of it destroyed, leading the fledgling EarthGov to assume it was nothing but a strategy of scorched earth, scuttling their fleets and making their commanders disappear to avoid handing them over to the victors.[note 1][9][9][9][10]

In the aftermath of the Titan Station incident in 2511,[11][12] EarthGov experienced significant turmoil within its infrastructure.[note 2][13] In the following three years, the efforts of the followers of Unitology to weaken EarthGov's military and favor among the public doubled. The Circle, a militant group of Unitologist extremists led by Jacob Danik, played a significant part in the insurrectionist campaign against EarthGov.

Their belief was that EarthGov's experiments on Markers were sacrilegious; with the apparent end of human existence at hand, the Unitologists began to attack EarthGov Marker test sites. EarthGov's inability to curb the Unitologist efforts became apparent to the public. At least five colonies, including Uxor,[14] fell dark over a period of sixteen days with EarthGov refusing to admit the severity of the situation.[15] The next colony attacked was New Horizons on Luna.[15]

By the year 2514, EarthGov's structure is failing; their status among the public has begun to falter, with anti-EarthGov graffiti coating the walls of even the closest of colonies. Though they continue to hold the majority of planets and stations, including Earth, that continue to support the government establishment, most of population has become noticeably and concerningly opposed to EarthGov rule.[13]

The Earth Defense Force is a military force that enforces the Earth Government's orders and is responsible for protecting Earth and her colonies.

EarthGov is deeply entrenched in the affairs of colonial politics, business and military administration. It holds the power to control travel throughout colonial space and, if required, to police, establish curfews and restrict traffic in certain areas, as well as dispatch military and naval forces to remove elements believed to ignore or threaten its orders.[16] It is also implied to have major influence in large corporations such as the Concordance Extraction Corporation.

The public announcement of the massacre on the USG Ishimura provides further evidence into EarthGov's consistent cover-up policies, the cause of the numerous deaths on the ship having been pinned on incursions by terrorist groups and declared the result of a "terrorist attack," instead of admitting the existence of the murderous element and the alien-infected life-forms responsible for the massacre.[17]

EarthGov's black operations are not restricted to scientific development, however; its control extends deep within commercial contracts with a number of private corporations whose documents can, at any time, be manipulated. As in the case of Isaac Clarke's father, Poul Clarke, the government regarded his work as ship architect with wary eyes and classified most of his service record for reasons never revealed.[18]

Combined with numerous black ops, the government apparently also hires field agents, or spies, to gather information on activities it is not privy to at certain times. One such agent, Kendra Daniels, was assigned to infiltrate the team of the USG Kellion sent to respond to the crisis on the Ishimura and retrieve the compromised Marker 3A for the government.[19][20]

Among the government's activities are numerous black or secret operations projects intended to hide, from popular scrutiny, several of its sensitive initiatives, such as the Markers.

The Sovereign Colonies had been spearheading research into replicating the Black Marker, an artifact of alien origin found on Earth.[2] Its research team was kept under extreme observation due to the mysterious, and possibly dangerous, nature of the Marker.[2][21] The replicas of the Black Marker, the Red Markers, were hidden in restricted-traffic star systems, such as Aegis VII, by General of the Army Ambrose Caiden in order to cover up the resulting horrors from public eyes. The efforts of the Sovereign Colonies to bury all research after the Tau Volantis incident prevented EarthGov from making any substantial strides into Markers for nearly two centuries.[8]

Despite its apparent awareness of a Red Marker's nature and of the previous disastrous attempts to control it by the Sovereign Colonies, EarthGov continued to manufacture the copies in the name of creating energy resources and conducting experiments after researching the codes stored by Marker 3A in the minds of people like Isaac Clarke and Nolan Stross. The most notable of these copies was the Site 12 Marker on Titan Station.

A book treating the subject of Unitology and Michael Altman's assassination, named "The False Messiah", was known to have been banned from major libraries on Earth and in the colonies.[22]

In the midst of large-scale space commerce, EarthGov establishes contracts with commercial corporations in order to benefit from the planet cracking business. Such government-related corporations include the Concordance Extraction Corporation and the Galactic Union Merchant Marine Corp, over which the government wields considerable power and is authorized to determine the legality of corporate mining operations.[16]

Various posters that can be found around the Sprawl in DS2. 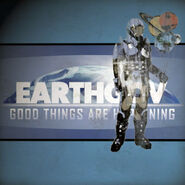 Graffiti on Luna expressing hatred towards the Government.