Exploders are a specialized Necromorph form that act as "suicide bombers," much like Crawlers. Their most prominent feature is the large, glowing pustule attached to their left arm, which is filled with a highly explosive chemical substance.

Exploders appear to be created from a single human host. The cranium of the host is split open vertically, with the brain cavity being filled with connective tissue that allows the two halves of the head to serve as "jaws." The left arm of the creature has become stiff, no longer having any articulation points except for the shoulder. A large pustule, filled with a glowing yellow chemical, has developed at the arm's end, making it very heavy and unwieldy. This substance is extremely reactive to blunt force, resulting in a powerful explosion when the force applied on it surpasses a certain threshold.

To counter the weight of the left arm, the Exploder's right arm and legs have been transformed in a way that moves the creature's center of mass away from the massive pustule, thus allowing the Exploder to walk - albeit very clumsily.

The right forearm has been extensively modified, with the right hand and foot fused together and extended in order to act as a leg, while the original legs and left foot have become fused and twisted to form a single muscular limb. Although Exploders move sluggishly in general, they are capable of displaying surprising bursts of speed after they have closed the distance between themselves and their intended targets.

Once an Exploder is within striking range, it will swing its pustule into its victim or the ground, resulting in a deadly explosion for anything caught in the blast radius. The blast produces enough force to dismember a human victim, and usually results in the destruction of the Exploder itself.

Due to their suicidal attack and relatively slow movement, they often attack in large groups in an attempt to overwhelm their target. Their presence can be easily detected by the distinctive cackling sounds they make when they are in the vicinity.

In Dead Space 3 a slightly altered, more deadly form of the Exploder is encountered, where it appears to be crawling, moving much faster than its upright counterpart. The signature pustule is still present, and still quite deadly in close quarters. To make matters worse, it seems to be dragging behind the Exploder's body, making it tougher to shoot at. It may be wiser, if not ammo-conserving, to fire away at the body rather than risk it getting too close before one can make the shot.

Early concept art of an Exploder. 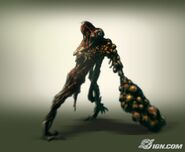 Full body overview of the Exploder

Isaac faces a group of Exploders.

Isaac kills an Exploder with the Line Gun. 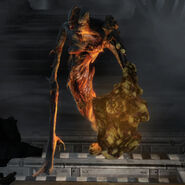 Another Concept art of an Exploder

An Exploder moving on its back in Dead Space 3