"We’re trying to figure out ways to have players slow down and be a part of the world that are organic and logical and not artificial game design. This is an enemy that’s designed to do that. He’s called the Flytrap..."
—Art director Ian Milham revealing Necromorphs that are being designed for Dead Space 2 in an article for Game Informer.[1]

The Flytrap is a Necromorph that was planned to appear in Dead Space 2, but was ultimately cut.[1]This Necromorph's appearance is that of a standard human body that has been suspended from the ceiling by its hands and feet. The entire front of the creature has had the skin ripped off, and its innards hang out from its torso.

The Flytrap was intended to act as a standard enemy as well as an environmental hazard. It was designed to lure the player from a certain location and attack them when they were within its proximity, similar to Guardians. The creature went through several revisions before its final form was created. 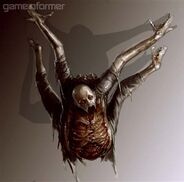 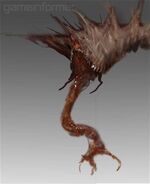 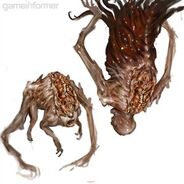 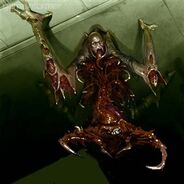