This article (Fodder), has one or more disputed facts. Please visit the Talk Page for more info, and clean this page so it meets wiki standards.

Wasters (also referred to as Fodders) are a Necromorph form introduced in Dead Space 3.

They are first encountered during the outbreak on the New Horizons Lunar Colony and later on throughout the story inside the ships orbiting Tau Volantis. Eventually, they are also encountered on the snow planet itself as Isaac attempts to make his way across the planet in order to find a way to stop the Markers.

Fodders use a rather cunning disguise in which they retain their hosts' clothing and overall silhouette, presumably allowing them to fool potential victims. The most immediate and obvious change to their appearance is their slime oozing eyes and mouth that emanate a ghastly yellow light. When this Necromorph is dismembered, the glow stops.

Unlike all other Necromorph strains, which rely on their mutated limbs and abilities to murder their prey, Fodders attack their victims using a variety of melee weapons, including ice axes, hatchets, bone saws, pipe wrenches, crowbars, and police batons.

Fodders emit sounds that closely resembles distorted human speech, these mumbles turning into angered roars when attacking a target, also letting out a near normal pained scream if injured and horrified scream during mutation.

While a Fodder's body has almost minimal physical alterations compared to a standard Necromorph, it possesses the unique ability to trigger mutations in action. Shooting them in either upper part or lower part can trigger various mutations. When the upper body receives significant damage, the torso explodes, revealing three pronged tentacles growing out of the host's pelvis. Upon damaging the legs, the pelvis will explode and three projectile-shooting appendages will sprout from the chest area for ranged combat and also to help with locomotion.

Fodders appear to have various appearances based on who the host was. The tools they wield also differ accordingly.

These Wasters were made out of recently deceased S.C.A.F. Pilots. Their hosts were equipped with green uniforms that covered most of their bodies leaving only their arms open to the elbows. They're coated in blood and slime and they lack some skin on their faces, exposing face muscles. They were presumed to be exclusively as the pilots of wrecked Mule, however, 200 years after the game's prologue that variant is encountered by Isaac Clarke on Tau Volantis which is most likely an overlook by developers since these Necromorphs retained their fresh condition even after 200 years.

This Waster variant is a mutated version of a Lunar EarthGov security officer. They carry two retractable batons as well as retaining their host's armor, albeit covered in slime. The helmet visor part is broken, exposing the face. The nose is gone, and the mouth area is bursting with slime. They retain all the damage the host has received before mutation.

This variant is mummified corpses of the crew pertaining to the fleet orbiting Tau Volantis. They appear to be wearing faded green uniforms with the S.C.A.F. logo on the left breast and shoulder area. Parts of the uniform are covered in dried blood and the right arm has exposed area with fleshy bone just like with any other Navy corpse. For unknown reasons this variant also appears on the surface of Tau Volantis in certain parts.

Those are mummified S.C.A.F. snow prospectors. Their hosts were once wearing Black-And-Yellow jackets. The only difference between them and the corpses of other S.C.A.F. snow scouts is that their faces ooze with slime. They carry a pair of ice axes with brown handles. They're found at S.C.A.F camps and outposts on the surface of Tau Volantis.

These are reanimated mutilated corpses of Circle soldiers. Just like with S.C.A.F. Snow Prospectors, the only difference between appearance of Circle soldier corpses and this variant is that their faces ooze with slime. They look bulky because of their RIG's and they carry a pair of ice axes with red handles. They don't use their rifles. They're encountered only in places with huge congestion of Unitologist Soldiers.

The S.C.A.F. Research Team variant is encountered only in the labs of the S.C.A.F. mountain peak base. Their hosts were once wearing uniforms which closely resemble those of Snow Prospectors, however, it's coloration is different being Blue-And-White jackets instead of Black-And-Yellow. Their hosts were also wearing masks with glass visors and peculiar filters. After mutation the visor part of their masks is broken and their uniforms are splattered in slime. The slime in their mouths can be seen pulsating through the filter. They wield a pair of saws that were most likely used to slice through Alien specimens.

S.C.A.F. Scientists that were issued with bulky suits for protection against radiation. After their deaths their bodies were left to decompose in their enormous suits resulting in mutation into forceful Necromorphs later on. They're oozing with olive slime that even bursts through the covering of their suits. Their gas masks are holding off the slime but it still can be seen protruding through the eye pieces. Their suits grant them soundly protection from any sorts of damage. They wield a pair of pipe wrenches.

All Appearances And Variations[] 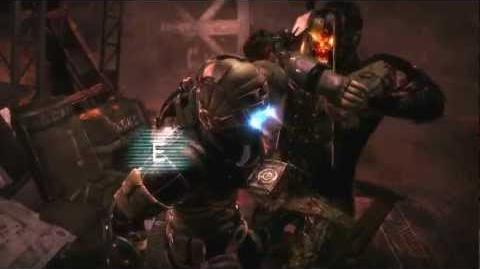 Enhanced Waster of a S.C.A.F. unit concept art albeit not darkened. 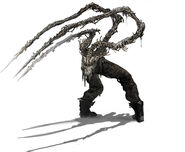 Corpse of Circle Soldier which doesn't differ too much from the Waster version.