The Grabber is a Necromorph featured in Dead Space: Extraction and the animated movie, Dead Space: Aftermath.

The Grabber is a Necromorph whose design was ultimately scrapped for the inclusion in Dead Space. Consisting of a seemingly inconspicuous human corpse, albeit slightly damaged, the Grabber uses the element of surprise by extending the mutated corpse's head an impossibly long distance towards the player and latching on to the player to either hold them still and distract them (not to mention disturb them), or drag them towards the Grabber's body while a serrated blade (formerly the corpse's spine) bursts out of the same orifice to kill the player.

In this case most of the main body's mass has been transformed to make and store the Grabber's extremely long, muscular neck and spinal blade. While these disturbing creatures were not in Dead Space, they do appear in Dead Space: Extraction. They seem to continue the purpose they were supposed to have in Dead Space.

They first appear in Chapter 6 of Extraction when Nathan approaches a corpse, partly submerged in the water, which does not appear to have been infected. Once he is closer in range, though, the Necromorph's head begins to shake before whipping upwards and startling the survivors. The Grabber then splits its human head in half and begins to shake McNeill's head violently with its tongue flailing around. Once it is dispatched, Warren Eckhardt states that the creatures are adapting to their surroundings. Several more Grabbers are found throughout the drainage system, surprising the team by lying in wait before lunging up from beneath the surface of the murky water. It is unclear whether the bodies were infected in the drains and simply mutated to best suit their needs, or if they were infected elsewhere and then moved to the drains by other Necromorphs. Although they do not appear to be able to move in the game, it is possible that they might be able to drag themselves into suitable ambush positions.

The Grabber latches onto McNeill with its tongue flailing around.

The Grabber in Dead Space: Aftermath.

The head lashes out.

The head about to latch onto McNeill. 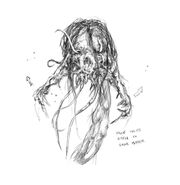 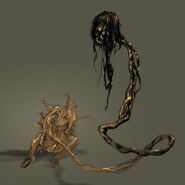 Early concept for a Grabber. 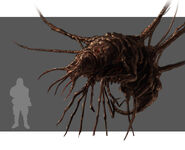