The Guardians are a variety of sessile Necromorphs. They are anchored onto walls, their flesh fused together with the Corruption. As a result, they cannot actively hunt for prey, but true to their name they serve as guardians to areas important to the infestation, or simply as hindrances that Isaac must clear in order to proceed.

While they are immobile and do not have any visible repurposed limbs, they are capable of killing anything that draws near instantly, striking the victim with a lethal scythe-tipped appendage, made from the host's intestines.

Guardians are created from a single human body that has been fused together with the Corruption growing on the walls, thus establishing a form of symbiosis. The transformation of the host is quite extensive and both their first and last stages can be witnessed.

At the beginning, the host, or at this stage the premature Guardian, still retains their human characteristics; however, they're heavily mutilated. More specifically, the torso is only intact down to the waist, where the abdomen is vertically split apart with the entrails hanging out.

At this stage, the newly formed Guardian is extremely weak and lethargic, easily dispatched and is incapable of performing any kind of lethal attacks. At the very most, they will play dead until approached, or otherwise alerted, when the Corruption will attempt to cause damage by flailing out the host's intestines over which the host has no control.

Despite the severity of the body's condition, it is clear that the host is still clinging onto life, still wailing in pain and agony. This fact further establishes the notion of a symbiotic relationship with the Corruption, as it would be not otherwise possible for a human being to live for so long having sustained such extensive damage.

Given sufficient time, the torso will transform and ultimately develop to the stage of a mature Guardian. The fusion between the human body and the Corruption has been, for the most part, completed, with the two being indistinguishable from each other, with most of the human features of the host body being unrecognizable at this stage.

While the Guardians do continue to scream and moan, suggesting that at least some part of the human brain is still functioning even at this stage, their transformation is otherwise very drastic.

The first thing one notices is the apparent increase in size compared to the previous stage, a result of the fusion with the Corruption's biomass. Moreover, the human arms, that were a characteristic trait of the premature stage, have now disappeared, probably atrophied or otherwise consumed by the Corruption, as they currently serve no purpose. Alterations can also be seen on the head of the host, with the lower jaw and part of the neck completely missing, exposing the trachea and leading to a wide open thorax and a newly created sac where the abdomen used to be. The latter two are two body structures that have been re-purposed and created, respectively, in order to accommodate with the Guardian's functions.

The thoracic cavity now serves as a place for the newly created tentacle appendages to rest. The creature has two kinds of said appendages. The first kind, are the appendages that are used to further anchor the creature on their spot and are instantly drawn out once the Guardian has spotted a hostile in their vicinity. The second kind of these appendages however is a single scythe tipped tentacle that serves as the creature's only means of attack in close quarters and is what makes the Guardian extremely lethal.

The sac is in fact an orifice that serves as a canal for the Corruption to spew out embryonic spawn, known as Pods, which will aid in attacking and keeping detected threats at a distance. 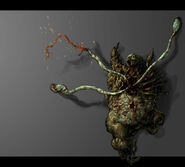 A Mature Guardian stretches out his tentacles. 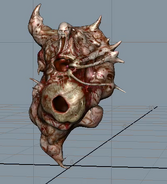 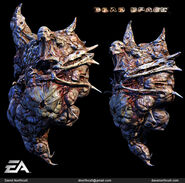 A tentacle the Guardians use to kill their enemies in close combat, this of a dead one. 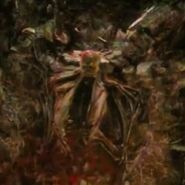 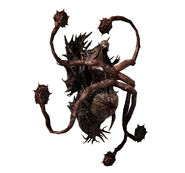 Guardian as it appears in Dead Space 3.