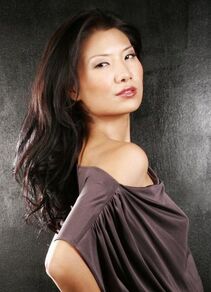 Gwendoline Yeo (born July 10, 1977) is a Singaporean-born actress who provides the voice and likeness for Isabel Cho in Dead Space: Aftermath.

Gwendoline Yeo (birthname Gwendoline See-Hian Yeo) was born in Singapore on July 10, 1977. She moved to the U.S. from Singapore to San Francisco as a teenager and then graduated from UCLA. She won national titles of Miss Asian America and Miss Chinatown USA. She then went on to an acting career. Her breakthrough role was her arc on Desperate Housewives in Seasons 2 and 3 cracking people up playing Eva Longoria's naughty maid, XiaoMei. She's also recurred on 24, General Hospital & Grounded for Life, and guest starred on NYPD Blue, JAG and The OC. Her Feature credits include AMC's hit western "Broken Trail" starring alongside Robert Duvall, Hallmark's The Magic of Ordinary Days and Robin Swicord's "the Jane Austen Book Club."

She lends her voice on several cartoon series including Cartoon Network's Zatch Belle, Disney's Safety Patrol, Nickelodeon's Superscout and the new X-Men. Video gamers best know her as "Paine" from Final Fantasy X-2, as well as from various roles in the Mass Effect; Uncharted, and God of War series.

Yeo and Chavira at a Desperate Housewives DVD release party.
Add a photo to this gallery

There is more information available on this subject at Gwendoline Yeo on the English Wikipedia.
Retrieved from "https://deadspace.fandom.com/wiki/Gwendoline_Yeo?oldid=149644"
Community content is available under CC-BY-SA unless otherwise noted.