The Handheld Graviton Accelerator, commonly referred to as the Force Gun, is a short-range kinetic booster device. Its function in mining operations is to provide blasting power beyond conventional explosive charges, thus making it suitable for precise terraforming applications. Some practical examples may include shattering rocks into smaller rocks, sending rocks between miners in zero-gravity situations, or deflecting wayward rocks away from miners during space operations.

In combat, the Force Gun serves like a shotgun; the primary fire shoots a wide kinetic blast of energy outwards, damaging everything in front of it. The closer an enemy is to this blast, the more damage is caused. Due to its short range, the Force gun is only viable for close-quarter combat. While the Force Gun's primary fire won't blow many of the tougher enemies to pieces, it will knock them back and away, creating breathing room in tough situations.

Its secondary fire, called the Force Bomb, serves as a grenade launcher that shoots a large, spherical, low-speed projectile that explodes upon impact with an enemy with great force. If it doesn't come into contact with a foe, it will roll around for a few seconds before exploding. Upgraded, the secondary fire can blow creatures to pieces.

The secondary fire has been modified in Dead Space 2, becoming a narrow beam with a brief charge time. The beam seems to be able to go through multiple Necromorphs. This only consumes one round of ammunition. 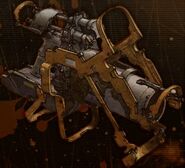 Concept art of the Force Gun from Dead Space 3 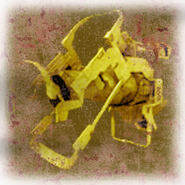