"The research in that Marker is worth every life we just lost! I won't let you throw all this away!"
—Tiedemann to Isaac[1]

Hans Tiedemann was the Director of Operations aboard Titan Station.[2] As the highest civil authority on the station, he ordered the evacuation of the station once he became aware of the Necromorph outbreak that spread from below in the Titan Mines.

According to one of the audio logs left inside the station, Tiedemann claimed that his grandfather had been running the station long ago.

Tiedemann led Engineer Karrie Norton (Vandal) throughout Titan Station's underbelly, citing that it was her responsibility to fix the damage that she caused in the Government Sector. He showed no signs of knowing about Tyler Radikov's influence on Norton's actions.

When he discovered that she shut the power down to the automatic seals of the station, he ordered Vandal to go to the station's reactor core before it overheated and destroyed the station. Vandal managed to destroy the cause of the Core's problem, a massive Necromorph, but was severely injured in the process. Tiedemann did not respond to her hails when she attempted to tell him that she had neutralized the problem in the Reactor Core. He may have not been able to hear the call.

In the multiplayer mode of Dead Space 2, Tiedemann served as the supervisor of a security force unit, instructing and providing directions to the squad as they proceeded with their objectives.[3]

Unable to control the outbreak, Tiedemann declared martial law and ordered an immediate evacuation of all personnel aboard the station. In succession, he also ordered the Titan Station Security Force to eliminate "key subjects" tied to the Marker research project which included Lexine Weller, Nolan Stross and Isaac Clarke. Graffiti-covered posters of him could also be found in numerous locations, suggesting that he was not loved among the station's population and primarily the Unitologist portion of it.

He was Isaac Clarke and Ellie Langford's primary opposition in their escape from Titan Station and he utilized numerous automated subsystems as well as teams of Security Officers to halt Isaac's progress throughout the station. There was also evidence of him following the orders of an individual known as the Overseer. The Overseer sent a log detailing disappointment in the station's evacuation and promised retribution against Tiedemann for authorizing it.[4]

After hampering Isaac at every turn, Tiedemann retreated into the Site 12 Marker chamber as his security forces battled the Necromorphs that Isaac had let into the Government Sector. When the Necromorph horde poured into the room, Tiedemann took refuge at the base of the Marker, inside its "dead space" field where the creatures could not approach him. He tried to explain himself and his reasoning for being protective of the Marker to Isaac via RIG link. At the same time, the Marker initiated a Convergence Event and released intense bursts of energy which left Tiedemann badly burned down his right side to the point that his skull and muscle tissue were showing.

In a rage, Tiedemann shot Isaac with a Javelin spear to the chest and to the hand as he approached the Marker. He declared that he would not allow the sacrifice of the populace and the Marker research to go to waste because of him. Isaac, however, gained the upper hand, breaking Tiedemann's arm and impaling him in the neck with his own Javelin Gun.

Isaac could choose to execute him with a shot to the back of the head which completely decapitated him, electrocute him, shoot him anywhere else in the body or leave him to die from his inflicted neck wound.[5]

Despite his numerous attempts to kill Isaac and his heavy handed attitude, Tiedemann saw himself as a protector of the station's residents. In one audio log, he stated that his family had a long-standing history as the runners of the station and he wanted to protect the station and its population from the Necromorph outbreak, regardless of orders.[6] This may be the reason why he ordered the evacuation in an attempt to save as many people as he could from the Necromorph outbreak on the station despite being ordered not to launch one.[7]

Tiedemann also believed in the Marker's promise of endless energy as it was seen when he exclaimed to Isaac that the outbreak was not EarthGov's fault and they were so close to harnessing the Marker's energy instead of destroying planets to collect resources. In a log left behind by Tiedemann, he made insights that humanity's reliance on destructive planet cracking would render humans extinct unless they could learn how to understand the Markers.[8]

Tiedemann appeared genuinely sorry for his need to combat Isaac, apologizing to him regularly and even remarking that Isaac's resourcefulness and determination would be admirable "in more favorable circumstances".[9] Eventually, Tiedemann's empathy progressively waned as he became more frustrated with his situation and finally morphed into violent anger as Isaac allowed the Necromorphs to breach the Government Sector, butchering his men and allowing them to reach the Marker.

Tiedemann broadcasting to the Sprawl. 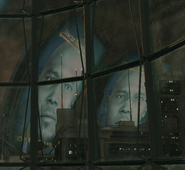 Tiedemann proving loyalty to the Sprawl by warning and evacuating citizens.

First glimpse of Tiedemann, revealed in the Sprawl teaser trailer. 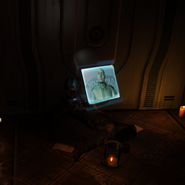 Tiedemann in a video transmission to Titan Security officers. 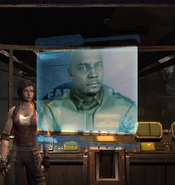 Tiedemann in a video transmission to Isaac, Ellie and Stross.