Formed from a human torso and legs, its wings are formed by a flap of skin from the chest and then fused between the former host's bent and broken legs. The jaw collapses within the body and the rest of the head breaks and twists into its proboscis and feelers with the spine providing support and attachment points for articulation (movement). The proboscis, which is made from mutated bone, muscle, and spinal tissue is the delivery mechanism for the pure necromorph tissue used to infect new hosts. This is done by enveloping the host in its wings, extending the proboscis from the spinal cavity, and then stabbing it into the skull to inject a yellow fluid stored in an internal bladder. In any room with the remains of crew members, these are the beasts that should be taken down quickly before you get overrun with newly created Necromorphs.

They seem to have a preference for corpses which have existing head wounds, possibly because this spares them having to crack the skull themselves; the Infector in the Morgue goes straight for the captain, with his eye-to-brain needle puncture, over any of the other corpses, and Challus Mercer is seen to have "prepared" corpses for them by boring a hole in the center of their foreheads. These corpses seem to be most noticeable in the Crew Quarters on the Ishimura. Dr. Mercer can also be seen killing Acting Chief Engineer Temple this way.

Infectors borne from the Aegis VII incident produce Enhanced Slashers (Unless the corpse being infected is that of a Marine, in which case the corpse will mutate into a Twitcher), while in the Sprawl incident, "Enhanced" form of the Infectors will make Enhanced Slashers, and regular Infectors will make regular Slashers. It is implied that the Infector also creates the other single-body types of Necromorphs in the game, although only the creation of Slashers and Twitchers are witnessed in-game.

Enhanced Infectors are a very rare sight , appearing only twice throughout the Sprawl. They appear as slightly-darker Infectors.

Early concept of an Infector.

Early concept art of an Infector.

Early concept art of an Infector spawning from a Slasher.

More finalized concept art of an Infector infecting a corpse.

Overview of a normal Infector

An Infector preparing to snatch onto a corpse.

An Infector forcing its proboscis into Isaac's head. 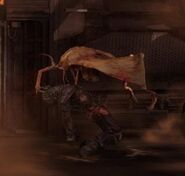 An Infector spears a corpse in preparation for transformation.

An Infector in Dead Space 2.

An Infector during the Sprawl Outbreak.

Infector's during the USG Ishimura Outbreak. 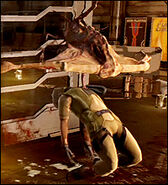 An Infector in Crew Deck.

Isaac aiming to kill the infector before it mutates a corpse.