Jacob Arthur Danik was the leader of the militant Unitologist organization active prior and during the rediscovery of Tau Volantis. During the events of Dead Space 3, Danik and his followers pursued Isaac Clarke and his allies to Tau Volantis with the intent of discovering the origins of the Markers and initiating humanity's ascension. He is the primary antagonist of Dead Space 3.

Danik was an active proponent in the Unitologist movement to overthrow the Earth Government, working alongside his brethren to compromise and attack their strongholds. Using the expendable funds accumulated by the Church, his "Circle" sect believed that they are liberating humanity by "freeing" the Markers stationed on various colonized planets from the test labs set up by the Earth Government.[1]

In the face of his followers' uncertainty and hesitation when experiencing the horrors of the Necromorphs, Danik remained steadfast in the belief that their mission was in the right way.[2][3]

Danik staged an attack on the planet, Uxor in a move to destroy the Marker Shroud 4 test site. His operatives went unseen by the likes of John Carver or the Earth Government units on the planet. Using Danik's user ID , they used the USG Perseus to set up a long-sight laser marker to guide a cruiser's missiles to the exact location of the Marker site.[4][5]

The missile destroyed the Marker's shroud and releaseed an EMP that knocked out the power in the area. After Residential was demolished by a falling ship, Danik and his men entered the Science Block in Sector 6 in search of the Sovereign Colonies Marker research discovered by Damara Carver. They captured Carver who stumbled onto them accidentally. Danik's men interrogated him for information. Danik, set on killing Carver learned that he was married to the woman that he was searching for.

Though he escaped, Danik was able to reach Damara and her son, Dylan first and killed them. Afterward, he listened in on Carver's RIG communication with Ellie Langford. Danik set up a trap for him near the cargo dock. Carver used Ellie as bait and sprung Danik's trap, allowing them to escape on the USM Eudora. Despite the group's efforts to hide their trail, Danik followed them to Keyhole Station and ordered an attack on the Eudora. Danik's efforts to gain the information and coordinates for Tau Volantis are foiled when Robert Norton destroyed the ShockRing that Ellie used to reach the planet. His ship was heavily damaged by the combined bombardment from Keyhole Station and the Eudora and seemingly driftted through space.

At an unspecified time, after crash landing on Tau Volantis, Norton made a deal with Danik. Excluding Clarke, in exchange for the safety of the rest of the crew, Danik would give him a ship and allow them to leave Tau Volantis unharmed.[6] Norton presumably gave Danik the coordinates to the planet before locating Clarke on Luna.

Danik spread an automated speech via zeppelin over the top of Luna's New Horizons Lunar Colony preaching about how the end of mankind came and the time of humanity's glorious rebirth was imminent. During this speech, he was preparing to launch an assault on the colony in the hopes of finding Clarke and killing him. The primary purpose of the attack was to unite the Unitologists against EarthGov as he believed that their tampering with the Markers was heresy.

During the genocidal attack on the sector, Danik first met Clarke as he was attempting to reach Norton's ship, the USM Eudora. He forced Clarke to watch as his men destroyed the shroud of a Marker test facility in the heart of the city. He ignored Clarke's warnings about the deaths that would follow the shroud's removal. Danik reassured him that death was just the beginning and the destruction of the human race was necessary. Clarke could not be allowed to interfere with Convergence. Before Danik could kill him, Clarke deflected his weapon and fell into a garbage dump full of EarthGov corpses. During the Necromorph outbreak spreading on the planet, Danik's attempts to cut Clarke off from the Eudora are foiled by the Eudora crew's combined efforts.

Later on, Danik and his followers reached Tau Volantis to the bafflement Clarke's group. During Isaac and the crew's experimentation with the Nexus, Isaac caught Norton secretly communicating with Danik, but when he was questioned, Norton said that it was nothing important. After Jennifer Santos gained the information necessary for the group to locate the Machine that worked in conjunction with the Codex, he apprehended Clarke, Norton and Carver. He reneged on his deal with Norton and revealed his intention to kill them all. They fought back and are able to chase Danik off during a firefight with his men.

Danik and his men appeared some time later, combing the research labs to find Clarke, Ellie and Carver. Instead of actively searching for them, Danik found a communications station where he broadcasted Unitologist propaganda in an attempt to wear down Clarke's morale.

Danik managed to corner them after the assembly of the alien remains in the Rosetta Facility. Clarke unknowingly revealed the true intention of the Alien Machine to him. The Moon above the planet was a massive Necromorph and the Machine was keeping the creature from completing it's original task that started with the alien race two million years ago.

Danik, convinced that the Moon was the divine embodiment of the Markers' will decided that the Machine must be deactivated in order to free it and become whole. Before Danik's men could kill Clarke and the others, Clarke activated the room's decontamination protocol. Among the confusion, Danik escaped with the Codex and a few of his men. He sealed the chamber and assumed that Clarke and the others would die in the fumes.

As Danik made his way to the Machine, his men informed him that Clarke and Carver survived and are hot on his trail. He gathered his remaining troops to slow them down while he descended into the underground alien city where the Machine resided. By the time he reached the bottom of the ventilation system, he found most of his ground forces dead. Aggravated, Danik demanded that more drop ships should be called in at once.

As Clarke and Carver pursued Danik through the caverns of the underground city, Clarke tried to convince Danik about the true nature of the Moon. He disregarded Clarke's warning as fear of the unknown. Clarke and Carver eventually caught up to him and struggled for the Codex. Danik lost the Codex to Clarke and Carver who fell down to the lower levels of the city. Enraged, Danik sent his remaining men on a manhunt for the two.

As Clarke and Carver prepared to use the Machine, Danik revealed his ace in the hole. Ellie was still alive and in his custody. If they want her back alive, they must let him turn off the Machine. Carver, believing that there are other ways to do the right thing gave Danik the Codex in order to save Ellie's life. Danik used the Codex to shut the Machine down. His actions triggered Convergence and freed the Moon from its frozen prison. As Danik looked upon the monstrosity in awe, a massive shard of debris impaled his body, killing him instantly.

Ironically, judging by extremely violent way Danik died and had his corpse buried, he probably couldn't be reanimated as a Necromorph. Althrough his biomass could have been assimilated as part of The Corruption, he died relatively far from sources of the tissue.

In the aftermath of his death, the Unitologist Cult born from the survivors of the Circle continued to heed the message of Danik on the CMS Terra Nova and used him as the saint for their cult. The propaganda video of Danik recruiting new members to the Church of Unitology is played in a loop in one of the whorship altars inside the Terra Nova.

Danik believes himself to be a fairly reasonable individual taking extreme measures to save mankind against a perceived enemy: the Earth Government. He always is polite, albeit in a passive-aggressive manner, when talking to Isaac. These are traits shared by numerous real-life terrorists.

Although clearly a religious zealot, Danik defended his beliefs by claiming to be a "man of science" and believed that Unitology's reverence of the Markers was grounded in fact, reason and logic. His faith in Unitology blinded him from the obvious truth of the Marker's capabilities and true purpose. Even after his view was proven false when the Markers are revealed to be mere conduits for the Brethren Moons, Danik was confident in his belief that Convergence was the best path for humanity.

According to him, the Markers' ability to manipulate organic life, coupled with the fact that the Black Marker on Earth was present long before the appearance of humanity was the evidence that humanity's evolution and development occurred due to the guidance of the Black Marker and its powers. The implication was that the entire existence of the human species was a result of the intervention of the Markers and humanity's sole destiny was to achieve Convergence. Danik used this argument to dissuade Isaac Clarke from resisting him, claiming that Isaac was impeding the natural evolution of the universe.

Usually calm and boastful, a turning tide sent him into angry rants as well as short-tempered demands for Clarke and his company to accept their fates. In this respect, his attitude was not unlike Challus Mercer during the events of Dead Space. As such, Danik's amusement with Clarke's uncanny ability to survive and push on after all of that he endured wore thin and he resorted to more direct acts of violence to stop him. Despite the claim that his actions are driven by reason and logic rather than religious zealotry, he still used religious accusations when angered, referring to Isaac as a "filthy heretic".

"Brothers and sisters. The age of man is at an end. We have became too many, too little to go around. Corporations that we once trusted with our money have squandered it. The governments that we once trusted with our future have sabotaged it. To their eternal credit we are dying… Fear not, there is a future. As promised by the prophet Michael Altman The Black Marker has a plan, for all of you… It will lift us up from our miserable existence and we will become one; united in body and united in spirit. Our unity will be our salvation. We'll live on, not as man, as God. The Church of Unitology is waiting for you my friends. Throw off the chains of this life and join us as the new one begins. I'm Jacob Arthur Danik, and I am this message."
—Jacob Danik, Chapter 1: Rude Awakening[1]

"I've done it. I've finally done it! The darkness is at an end! Let the evolution begin!"
—Jacob Danik's last words.

Jacob with Ellie at gunpoint. 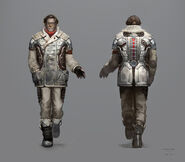