Commander James was the head of P-Sec on the Aegis VII Colony at the time of the events of Dead Space.

An elderly man, James was quite level headed and pragmatic, trying to ensure that order was kept in the colony. After the series of tragic events following the discovery of the Marker, Commander James took the stance of fellow P-Sec officer Abraham Neumann in seeing the Marker as the cause of these issues, even going so far to try and convince the Colony Manager, Hanford Carthusia that the operation should be abandoned, but refused and went off. Neumann asked James what to do next and James said "Brace ourselves". Those are the last moments of James. It is unknown exactly when or how Jones, McCabe, and James died, but appeared to be committed suicide in the P-Sec Headquarters, to probably, avoid being perished by the Necromorphs.

Later, he was found dead by Neumann and Marla after the infestation of the colony began. His torso had a massive hole and his lower jaw was torn off. Soon after this grisly discovery, he morphed into an Infector and began infecting the other corpses in the room. He was supposedly killed by Neumann. As necromorphs aren't easily killed by bullets, the Infector survived its injuries and resumed its work with the other corpses. 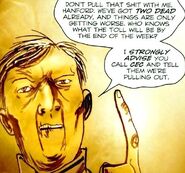 James discussing the incidents on the colony

James turning into an infector

James as an Infector
Español
Community content is available under CC-BY-SA unless otherwise noted.
Advertisement