Jane Gauthier was a security officer on board the USG Ishimura.[1]

After graduating, Gauthier took a job in Security Management at the CEC's assembly plant. Gauthier's grandparents were known to reside within the populous zones of North Carolina, with her grandfather managing the shuttle convoy while her grandmother cooked for the East Wing cafeteria.[2]

Eventually, Gauthier was temporarily assigned to the Aegis VII Colony from another Colony in the role of Search and Rescue, where she participated in a fire emergency. Though her efforts were successful, she lost three of her fingers in the process. Back aboard the Ishimura, Gauthier spent time with a medical technician named George Greggs while waiting for the suitable replacement fingers to be grown for her. It was possible that Gauthier later became involved in a relationship with Greggs judging from some of the logs and documents that are found around Greggs' lab. However, it appeared that she eventually became uncomfortable with such a relationship and she intended to end it.[3]

During a final transmission that she sent to Greggs that was intended to break their relationship off, Gauthier suddenly began to scream as something broke into the place that she was recording in. The picture suddenly halted. 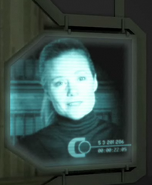 Gauthier, as she appears in her last transmission to Greggs