"The Javelin Gun uses javelins for penetrative survey work. These javelins pierce and impale enemies, and using the alt-fire causes an electrical shock to be activated from the last javelin fired. "
—Dead Space 2 Manual

The Javelin Gun is a telemetric survey tool manufactured by Timson Tools, designed to fire titanium spikes or "javelins" at high speeds with extreme accuracy and piercing power.

Upon firing, the projectile will travel infinitely until it hits a surface, to which it will remain planted and cannot be removed by any means. If a sizeable enemy is hit with a flying spike, it will be pinned against the nearest adjacent surface, immobilizing it. Necromorphs larger than a Slasher (e.g. a Pregnant) cannot be pinned, no matter where the spike hits. If no surfaces are within proximity, the impaled Necromorph (if its size is comparable to a slasher) will be pinned to the spike, flying in a straight path before slowly arcing down. In a zero-g area, the Necromorph will continue flying straight with no arcing path.

The alternate fire mode electrifies the titanium spike, causing electricity to arc off the spike and shock nearby enemies (Or the user, if he/she is too close). The secondary fire can be upgraded to add an explosive effect after the electrical burst.

In Dead Space 3, a weapon with a Telemetry Spike tool attached creates a basic Javelin Gun. The secondary function from Dead Space 2 cannot be recreated, however, as the lower function can only be either an Explosive or an Electrocution Module.

Most Telemetry Spike configurations creates various Javelin Gun variants, except for when tipped with a Conic Dispersal, which turns it into a rivet shotgun instead.

Official Artwork of the Javelin Gun

Isaac Impaling a Slasher to a wall 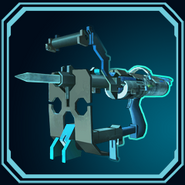 Concept art of the Javelin Gun from Dead Space 3