Dead Space Wiki
Register
Don't have an account?
Sign In
Advertisement
in: Characters, Articles with Spoilers, Deceased,
and 3 more

Jennifer Santos was a technician[1] who worked at Keyhole Station located in the Carina Nebula. She was a member of Ellie Langford's team who attempted to reach Tau Volantis.

When Keyhole Station was overrun by the Necromorphs, Jennifer Santos and Austin Buckell are fending off a group of the creatures when they encountered Ellie Langford. Separated from Robert Norton and John Carver, Ellie mistook Santos for a soldier, but Santos clarified that she was a technician. Santos and Buckell managed to clear the station's hangar deck, but they are still trapped with no way to get to Carver or Norton.

Ellie chose to go on with the mission to Tau Volantis without the Earth Defense Force soldiers. Santos and Buckell prepped a Sub-Light Flyer to head through the ShockRing with the coordinates that Ellie provided.[2] The blind jump to the planet was successful, but shortly thereafter, they lost contact with Norton and the USM Eudora.

Thirteen days after their journey, Norton and Carver successfully made the jump to Tau Volantis. Accompanied by Isaac Clarke, the group located Ellie's S.O.S. signal on the Sovereign Colonies Armed Forces ship, the CMS Roanoke.[3] Norton and the others reached their location within the ship. Santos and Buckell are discovered injured by unseen events. Santos was relieved to finally meet Isaac, believing that the mission's success was likely with him present.

When Isaac investigated Admiral Graves' quarters and learned about a key thought to control the Markers, she, Ellie and Buckell remained on the Roanoke and searched for a way to get down to the planet.[4] She helped Clarke work his way through the ruins of the Sovereign Colonies flotilla via RIG transmissions toward the necessary locations. Once all of the necessary parts required to repair the CMS Crozier are found, the team braved the debris and mines loitering their flight path to get down to the planet. The attempt damaged the shuttle. The shuttle broke apart, separating them from Isaac in the crash.[5] Hounded by the storm systems plaguing the planet, Santos and the others barely managed to make it to a bunker using flares. Though they managed to find snow suits for each other, there are not enough for everyone. Buckell chose to stay behind.[6]

Santos and the others made their way to a research facility and are attacked by a swarm of Necromorphs. Once they are safe, Santos examined the written logs left behind by the SCAF dig teams and learned about an experiment that was used to locate the Machine. She believed that if they could replicate the experiment, they could find the Machine.[7]

On the way to the other end of the complex, the group was attacked by the Unitologists who separated them from Isaac for a time. They managed to escape unharmed and proceeded with getting the experiment off the ground. Santos spearheaded the effort, excited by the new discoveries made with the frozen corpse of the creature known as the "Nexus". She explained that the creature was used to triangulate the Machine's signal with a sensor. During that time, she decrypted more of Earl Serrano's logs and learned about an individual named "Rosetta" that was a key part of the "Codex" mentioned by Admiral Graves. After Isaac successfully rebuilt the sensor necessary for the experiment, Santos managed to locate thousands of signals beneath the surface with the thawed corpse. To reach them, however, she and the others would have to climb to the second dig site higher up the mountain.[8]

Santos and Ellie prepped the climbing the gear for use. When Isaac and Carver returned without Norton, Isaac tried to explain what happened between them, Danik and Norton. Santos, beginning to feel the gravity of their situation sinking in felt that their predicament was hopeless. In return, Carver reminded her that the mission was all of that mattered and she would be left behind if she became a liability, to which Isaac interjected, stating that no one would be left behind. Santos comforted a distraught Ellie, acting as a go between for Isaac and her friend for a time.

While they waited for Isaac to lower the cargo cage, she, Carver and Ellie are attacked by the Necromorphs. Ellie acted as Santos' protector during the attack. Isaac found the winch and reactivated the generator for the cage. He talked to Santos, frightened by the precarious Machine, distracting her from her present location. Once the cage reached the top, the beast that hounded the group since they landed on the planet attacked the structure. Trapped, Santos begged for Isaac's help. Before he could do anything, Carver decided to cut the wire rope of the cage from its base. Despite Isaac's best efforts to rescue her, Carver managed to cut the wire and Santos plummeted to her death in the cage.[9] Her death shook Isaac badly, but was not in vain as he managed to kill the beast. 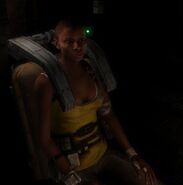 The arm of Santos' corpse after the fall in Chapter 13