Jones was a P-Sec officer on Aegis VII. He was a partner and friend of another officer named McCabe. The two officers worked together on a number of cases with the most notable ones being the investigation of the extraction site massacre and the tallying of the dead at P-Sec HQ. He later was trying to inform the other officers (Gabe and McNeill too) that body shots did not kill the Necromorphs and they needed to be decapitated first. He was killed during the Necromorph invasion of the colony and was transformed into a Necromorph while Abraham Neumann and Marla Janssen received a call from a distressed miner. He was trapped behind a desk by the duo and was beheaded by Neumann. Since Slashers could not be killed by decapitation, he most likely survived the fight with Neumann. 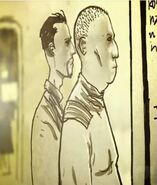 Jones during his transformation