Concordance Extraction Corporation
Jonn Welland was a clinical psychiatrist on the Aegis VII Colony.[1] Along with a fellow physician named Tom Sciarello, Dr. Welland futilely attempted to treat the colony's residents' numerous psychological problems caused by the Red Marker. When his own prognostic analysis proved fruitless, Dr. Welland transferred a few of the affected colonists to the USG Ishimura for study at the request of Dr. Terrence Kyne. Most notable of the transfers was the prisoner named Harris whose detailed psychiatric report could be found here.

During the pandemonium following Planet Crack, Welland and Sciarello went to the colony's medical lab to prepare it to receive the wounded. The two doctors engaged in a heated discussion over medical ethics, particularly their roles as physicians in the crisis before stumbling across the dormant Necromorphs in the morgue. Welland was presumably killed shortly thereafter. 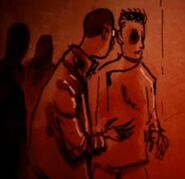 Welland and Sciarello discuss their next course of action