Karklins was a Security Private aboard the USG Ishimura.

Karklins was a recent addition to Gabe Weller's security team and was assigned to retrieve the bodies of the Union Square suicide victims from the Aegis VII Colony alongside Weller, Baines and Hutchins. P-Sec detective Nathan McNeill joked that his status as "the rookie" was why he was given the assignment, and Karklins replied that he was brought along because Weller would not handle dead bodies.

They arrived at the morgue to find the bodies missing. During the search, Karklins discovered the toe tag of a man named "D. Abbott". McNeill identified him as the one who had led the mass suicide. Karklins became extremely nervous after helping McNeill and Weller kill a crazed doctor in the morgue. During the colony blackout, he began experiencing symptoms of dementia such as mumbling to himself and hearing voices calling to him. He managed to briefly overcome his symptoms and fight his way out of the building with Weller. When he and Weller met McNiell again in front of the P-Sec headquarters, Karklins was ranting and speaking nonsense to himself.

Weary of his behavior, McNeill suggested that Weller should take his private's weapon. Weller did not take McNeill's warning seriously and Karklins sucker punched him and proceeded to attack McNeill. Despite having the advantage of surprise in the beginning of the fight, he was overpowered by McNeill who killed him with Sam Caldwell's Rivet Gun. 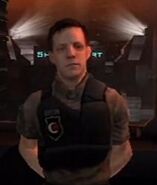 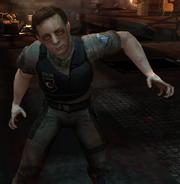