"I have the Marker, and this entire system can go to hell. For what it's worth, you did a great job, Isaac. See you around... Or maybe not."
—Kendra to Isaac Clarke.[1]

Kendra Daniels was the computer specialist aboard the USG Kellion as part of its emergency maintenance team and secretly an agent working for the Earth Government.[2] She was the main antagonist of Dead Space.

No information of Kendra's life prior to her service on the Kellion was given upon Zach Hammond's request.[3] She was inserted into the team upon persistent recommendations by a higher-up in the Concordance Extraction Corporation. In reality, the true reason for her presence was to serve as a covert agent for EarthGov during its efforts to recover Marker 3A.[2]

Incident on the USG Ishimura[]

Shortly after the crash landing of the USG Kellion, the crew made their way into the USG Ishimura's Flight Lounge. There, the crew was attacked by multiple Necromorphs who immediately dispatched the two lower ranked security personnel, Cpl. Chen and Cpl. Johnston. The crew scattered. Kendra ran with Hammond while Isaac Clarke made his own route to relative safety. She and Hammond contacted Isaac from the Bridge as he moved through the ship, guiding Isaac through various locations until she and Hammond were attacked by a Leaper on the Bridge.

The Necromorph drove them from the Bridge, separating Kendra from Hammond. After finding refuge in the Ishimura's Computer Core, Kendra successfully barricaded herself inside and kept in contact with Isaac Clarke and Zach Hammond through their RIG links. She used her computer skills to assist them with their tasks around the ship by overriding the doors throughout the ship as well as uncovering the mystery behind the vessel's infestation.

She frequently expressed her distrust toward Hammond, suspecting that he knew more about the Marker than he led on. She behaved much more frantically than both Hammond and Isaac, often urging them to abort the mission and focus on the escape. Later on, the Marker's influence began to take its toll on Kendra, causing her to hallucinate. These hallucinations included seeing her brother and at one point, Kendra mentioned seeing her brother waving at her from a security monitor, even though she said it was "not possible".

After recovering Marker 3A from the Ishimura's Cargo Bay, Kendra left her position in the Computer Core to meet up with Isaac and Dr. Terrence Kyne at the escape shuttle in order to return the Marker to the surface of Aegis VII. However, as soon as Isaac approached, Kendra shot Kyne in the chest with a Divet pistol in order to secure the shuttle and the Marker for herself. Kyne died almost instantly as the shuttle took off and exited the Ishimura, effectively stranding Isaac. While on the shuttle, Kendra (through her RIG link) revealed herself to be a covert agent who had been specially selected by 'higher ups' to be on board the USG Kellion to recover the Marker. She revealed the USM Valor had been sent to help her retrieve the Marker. She also revealed the true origin of the Red Marker and its purpose: a man-made replica of the true Marker discovered on Earth. Kendra bid Isaac farewell, but Nicole Brennan (in reality, a hallucination caused by the Marker) showed Isaac how to recall the stolen shuttle. Kendra's shuttle was recalled back into the landing bay, but not before Kendra boarded an escape pod and crash landed somewhere near the Necromorph infested colony on Aegis VII.

Stranded, but not defeated, Kendra hid in wait as Isaac made his way through the Necromorph-infested colony to return the Marker to its pedestal which upon doing so sent a wide electromagnetic pulse out that disabled the Ishimura's gravity tethers, causing it to drop its payload down toward the planet that it was excavated from.

As Isaac hurried into a decontamination room on the way to his escape, Kendra made her move, trapping him within the facility as she retook the Marker. As revenge for acting against her, Kendra revealed the truth to Isaac: Nicole had killed herself before the Kellion arrived with a hallucination guiding Isaac the whole time, stating that he was "just as insane" as Dr. Kyne and Captain Matthius. She also confessed that she was starting to like Isaac. After giving her farewells, Kendra hurried back to the landing pad, intending to strand Isaac on the doomed planet while she escaped with the Marker in tow.

As Kendra was preparing to load the Marker into the shuttle and make her escape, she was apprehended by Isaac who made his way around the facility through another route. Before he could reach her, the Hive Mind rose up from the mining crater and smacked her away from the shuttle with a tentacle, gravely injuring her. As Kendra tried to get up, she screamed as one of the massive tentacles smashed down onto her, crushing her body and slamming her against a nearby wall. Kendra died immediately upon impact, causing her RIG to flat line as the Hive Mind emerged from the crater.

In the end, Kendra's mission failed as the Marker was destroyed in the impact, foiling her employers' plans for the artifact. However, by recovering Isaac and later Nolan Stross and using the blueprints in their brains, the Earth Government was able to start building more Markers. 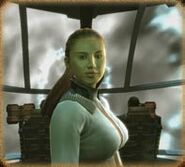 Kendra during the shockpoint to Aegis VII. 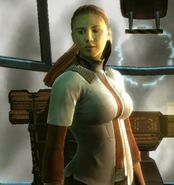 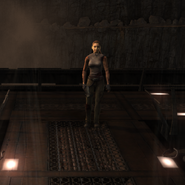 Kendra about to meet the Hive Mind. 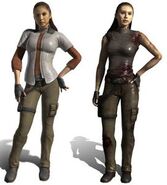 Kendra's outfit as she arrived on the Ishimura (left), Kendra without her jacket on Aegis VII (right).

An unused concept for a gored Kendra. 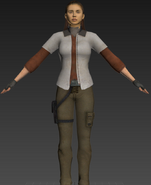