A Kinesis Module, also referred to as G.R.I.P. or Telekinesis, is a small modular plug-in resembling a thick grille heat sink designed for use along with a Stasis Module. The device is used to suspend and handle objects, both heavy and light, via an artificial gravity field created by the module.

Kinesis is technology that allows human engineers and construction crews to move large masses easily in almost any environment. Hands-on Zero-Point applications have found use not only in space-borne construction, but also on planetary projects where bulkier construction exoskeletons and machinery are neither suited, nor welcome.[1]

Kinesis works by projecting a tube of crackling white energy (an artificial gravity field) from the glove slip's palm emitter pad. Once grabbed by the leading edge of the energy tube, the desired object's gravity is presumably nullified and drawn toward the wielder. Small objects will stop about a foot from the pad, suspended in midair, while movable objects like rail pallets and shutters come as close as their connections allow. Deactivation of the Kinesis effect releases the object, leaving it to fall in the direction of the nearest gravitational center of mass. However, reversing the tube's polarity any time after achieving latch-on causes the object to be thrown away from the wielder with a velocity inversely proportional to the distance from the palm emitter pad.

Unlike with the Stasis Module, Kinesis' energy is drawn directly from the internal power source of the user's RIG, and as such does not require replenishment. Various features of the module can be upgraded at any workbench via nanocircuitry power node amelioration.

The Kinesis Module fits into the top of the Stasis Module armband just forward of its rear focus cylinder, and works in conjunction with a round emitter pad built into the palm of the glove-slip component. The module allows the wielder control over almost any organic and inorganic material with the wave of a hand.

In the Dead Space games, Kinesis is used in a variety of different ways. The default and most common use of Kinesis is to pick up and move around objects in the environment. Sometimes this is to simply move objects out of the player's way, or other times to transport objects such as Power Cells to a specific location. Kinesis is also commonly used to pick up items that are out of reach or in places the player is unable to get to.

Kinesis can also be used to grapple larger objects. Most large objects that are affected by Kinesis are usually large pieces of machinery that can be interacted with differently depending on the way they function. Common grapple interactions include such things as moving objects along a track, and deploying bridges and walkways that may be suspended above the player.

In all Dead Space games, the dismembered blades of Necromorphs can be used as impalement objects.

In Dead Space 3, there are special Stasis Amplification fields found within the alien city that, when stood upon, will greatly augment Isaac and Carver's Kinesis and Stasis power, enabling them to effortlessly rip limbs off of live Necromorphs, thus killing them and saving ammo. The only downsides to using these fields are that Isaac and Carver must remain within the (relatively small) perimeter of the field for the effect to last, also the player's movement is greatly hampered when standing on a field. Amplification fields are relatively rare, only appearing during specific situations towards the very end of the game. 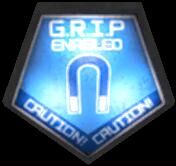 The G.R.I.P. icon found on many heavy objects that can be manipulated by Kinesis.