"And almost instantly, he is perched on his hands, shifting his weight from one palm to the other. He's pacing, circling the room and... he appears to be watching me! He sees me! No, he's fixated on the ceiling now... Oh God no, he's leaping at the vent! With his powerful tail-like appendage, he's striking at the reinforced covering, trying to get it open! I must warn the others!"
—Dr. G Abernathy observing a transformation of a Leaper

Leapers are Necromorphs appearing in almost all the Dead Space series, with the ability to leap long distances toward their prey. Sporting razor-sharp fangs, along with a long scythe-tipped tail made from the victim's intestines and legs, they are extremely deadly foes.

Leapers appear to be made from a single human corpse, with the host body's modifications serving to give the Necromorph vastly increased mobility. The musculature of the upper arm becomes more developed, and the fingers grow bladed claws for climbing and slashing with the hands becoming dislocated along with the thumbs moved to the back to create animal-like paws.

There is a slight lengthening of the vertebral ridges, and the flexibility of the spinal column is increased to help in locomotion. The legs are completely re-shaped: the muscle and bone is flayed, fused together, and lengthened into a single limb tipped with a sharp blade of considerable weight and durability. This tail is highly flexible, able to contract and coil into about a third of its original length. The Leaper uses its powerful tail to quickly launch the creature toward its victims or uses it to stab into its enemies in a similar fashion as a scorpion, as seen with Eckhard. The cranial and sinus areas of the skull appear to have been dis-articulated from the neck, and the jaws have become heavily mutated. The upper sets of teeth are completely gone, along with most of the palate reaching back into the throat. In their place is a pair of multi-jointed appendages that bear sharp, bony fangs. The lower jaw is split into two curved mandibles ending in knife-like fangs.

In Dead Space 3, the mummified Leapers—like most of the mummified Necromorphs—bear unique and bizarre mutations not seen in their “fresher” peers. Instead of massive fangs, a multitude of fingers have sprouted from around their mouths; similar supernumerary limbs and digits have grown seemingly at random from their bodies. They also retain scraps of the clothing they wore in life. The mummified variants of the Leaper that are seen in the events of Dead Space 3 seem to be a fusion of multiple corpses, rather than the being composed of a singular corpse.

Leapers have frequently been encountered in all known major Necromorph outbreaks (with the possible exception of the one which befell the Aliens three million years ago). They are able to navigate Zero-G environments, crawling swiftly across surfaces or jumping between them to pursue prey.

Leapers appear to scout their possible victims by quickly flashing through open vents and rattlings in an attempt to scare its target and suddenly jump out of nowhere with its high speed and agility.

Leapers also have an Enhanced form that are encountered later in the games. Enhanced Leapers are darker in color and possess glowing eyes. They are much tougher than normal Leapers, sometimes taking 2-3 shots from the Plasma Cutter (depending on which difficulty you chose) just to sever a limb. They are also capable of doing more damage than a normal Leaper.

Concept art for the Snow Leaper

Back view of the early Leaper 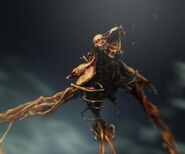 Concept art of a Leaper

Concept art of a Leaper's face

View of the Leaper concept.

Finalized 3D model of the previous concept art as seen in a screenshot of an early version of the first Dead Space. 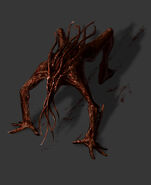 Early concept for the Leaper

Previous concept art work finalized as a 3D model in an alpha version of the first Dead Space. 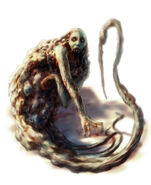 Enhanced variant of the Leaper

Overview of a normal Leaper

A Leaper preparing to swing its tail (notice the missing jaw).

Isaac stomping on a Leaper's head