Lieutenant Marcus was part of the security team serving on the USG O'Bannon.

During the Necromorph outbreak, Captain Caleb Campbell ordered him to take a security team and headed to the Engine Room to check on the engineers after Campbell lost contact with them. He, Alejandro Borges and Lana are the only ones who escaped from the Engine Room to the science lab. There, they met up with Nikolas Kuttner, Isabel Cho, Nolan Stross and Captain Campbell.

When it was decided that they would head back to the Engine Room to destroy the Marker shard, the planetary debris broke through the ship's hull, creating a vacuum. Marcus did his best to hold on as Kuttner attempted to rescue him, but a Necromorph jumped him, causing him to lose his grip and got blown out into space. 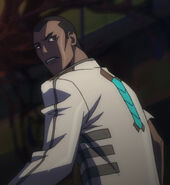