Dead Space Wiki
Register
Don't have an account?
Sign In
Advertisement
in: Articles with Spoilers, Characters, Deceased,
and 2 more
English

Mark[1] Rosen was an Earth Defense Force pilot assigned to the USM Eudora.

Alongside his co-pilot, Locke, Rosen piloted the Eudora down to the New Horizons Lunar Colony to secure Isaac Clarke from The Circle under Jacob Danik's command.[2] Under Captain Robert Norton's orders, he and Locke entered ShockSpace using the last known coordinates used by Ellie Langford. When they arrived at Tau Volantis, the ship was bombarded and severely damaged by mines left by The Sovereign Colonies Armed Forces Flotilla.[3] During the rush to safety, Rosen injured his leg and was incapacitated.

The destruction of the Eudora sent the room that Rosen and Locke are sealed in hurling through space straight into the debris field of the abandoned S.C.A.F. Fleet. Norton, Clarke and Carver managed to evade the mines and regain control of the compartment. They took shelter inside the CMS Roanoke. On top of losing oxygen, Rosen was still losing blood from his injury in spite of Locke's attempts to stop it. Norton and Carver attended to the pilots while Isaac Clarke triangulated the location of Langford's S.O.S. signal.

Once Langford and her team are found, Rosen begrudgingly assisted in the salvage of parts for the CMS Crozier in order to get the shuttle running again. Managing to find a functional S.C.A.F. EVA suit, Rosen found the aft section of another shuttle, near the CMS Greely , with a still intact engine. With assistance from Isaac, Rosen towed the engine back to the Roanoke and installed it into the Crozier. Once the Crozier was repaired, the group made the journey down to the planet. The debris and mines damaged the shuttle significantly. A hull breach formed at Locke's station and sucked her out of the ship in into the atmosphere, killing her. Further deterioration of the ship as it plummeted further into the atmosphere resulted in a breach of the containment glass, and shrapnel from the ship was shaken loose and sliced Rosen's head in half, killing him instantly.[4]

Isaac later came across Rosen's corpse buried underneath the snow in the remains of the Crozier on Tau Volantis. He frantically dug it up, initially believing it to be Ellie, but tossed it aside upon realizing that it was not.

Rosen in the USM Eudora

Rosen's corpse after the crash 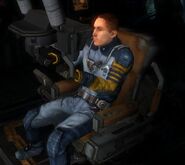