"Oh my God. I built that?"
—Isaac Clarke

The object designated by EarthGov as the Site 12 Marker or Marker 12B, also known as the Titan Marker, the Golden Marker and Isaac's Marker was the source of the Necromorph outbreak on the Sprawl.

Marker 12B was the largest Marker encountered so far by humanity.

Marker 12B was built by a team of scientists and engineers stationed on Titan Station under the orders of Director Tiedemann. Many details regarding the construction process remained a mystery, but various logs suggested that the Marker was either "grown" in mineral bath or physically constructed using machinery.[1]

The team used Isaac Clarke, Nolan Stross and at least three others (Clarke and Stross are called Patient Four and Patient Five, respectively) suffering from mental illness from a Marker's signal as the basis for their research. The signal implanted specific codes into their brains at an earlier time - in Isaac Clarke's case, during the events of Dead Space - and these "blueprints" are extracted from them during sessions in the NoonTech Diagnostic Machine, using a needle through the ocular cavity (The eye) into the patient's brain.

Logs found by Isaac throughout the course of Dead Space 2 revealed that, to highly intelligent people such as Nolan Stross and Isaac Clarke, the Marker's signal manifested inside their minds as 'blueprints' for the construction of a Marker. People of lesser intelligence are simply driven mad by the Marker's signal over time. To them, the signal only manifested as noise.

When Isaac arrived at an overlook above Marker 12B's chamber, he was positioned above a mass of Necromorphs at its base. Nicole appeared and told him that they are coming to the Marker as Convergence was at hand. During a holographic video message from Tiedemann, the sheer mass of bodies near the Marker triggered the start of Convergence.[2] The Marker flashed and emitted a noise like a fog horn followed by an upthrust of wind drawing the Necromorphs up into the air. When asking what it was doing, Nicole simply replied, "What it was made to do. Isaac, you have to make us whole." This echoed what she said in Dead Space during Isaac's encounter with the Red Marker.

While it was unclear precisely what Convergence was (At least until Dead Space 3), both the Unitologist dogma, Nicole's statements and some developer comments seemed to indicate that it culminated in the creation of "something greater " which we now knew that it was another Brethren Moon. An important part of this was the accumulation of a large number of Necromorphs and as it was stated by Nicole "absorbing the maker" of the Marker (In this case Isaac), by killing and converting them.

After using the NoonTech Diagnostic Machine to gain the knowledge necessary to destroy the Marker, Isaac arrived at the foot of the Marker to find Nicole bathed in a bright light. Once Tiedemann was taken care of, Isaac was shocked when Nicole revealed that her true motive was to kill him in order to allow the Marker to absorb its creator's body and complete the Convergence Event.

A fight took place in Isaac's mind against the apparition of Nicole and shadows that looked and behaved similarly to The Pack. By shooting at Nicole, Isaac was able to expose the parts of his brain where the Red Marker still had an influence over him and destroy them.

Isaac emerged from his mind after defeating Nicole and destroying the Marker's influence to find the Site 12 Marker essentially dead and crumbling. Although Isaac was able to escape thanks to Ellie, the reactor cores of the station became unstable, resulting in the complete destruction of Titan Station and the remains of the Marker.

One of the most obvious differences between the Marker12B and the Marker 3A was the size and color. The Site 12 Marker stood at an incredible height, towering above Isaac and the Necromorphs, compared to the Red Marker's height of roughly 10 feet. Interestingly, when you got a closer view of the Marker before the encounter with Tiedemann, you can see the Site 12 Marker pulsating gold and red rapidly.

It was possible that the Necromorphs are attracted by the Site 12 Marker despite the dead space surrounding it. When enough bodies surrounded it, the Convergence Event began, though it seemed possible that they are not "attracted" directly to Marker 12B until the creator (In this case, Isaac) was assimilated. Hans Tiedemann was able to find safety at its base, despite being surrounded by hundreds of Necromorphs in the chamber.

Another possibility was that the dead space field of the Site 12 Marker was weaker than that of other Markers, either due to the relatively smaller inscriptions adorning surface in comparison to the previous Markers or the markings more horizontal pattern. Therefore, it could be a possibility that the functionality/power of the Markers was (Largely) determined by the precision of the scrawls written on them.

A third theory is that the Marker's overall size is not proportionate to the dead space field it emits. That it emits a similarly-sized field as the Red Marker, but its massive size ends up filling up a majority of the dead space and thus having a much smaller visible distance that Necromorphs can approach.

Concept art of the Site 12 Marker.

The Necromorphs gathering for "Convergence". 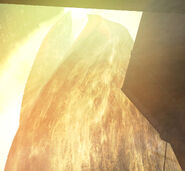 The active Marker during "Convergence".