The Medusa is a Necromorph found exclusively in Zero-G environments. It has only been encountered on Tau Volantis and like the Alien Necromorph, the Snow Beast, and the Nexus, the Medusa also seems to be a Necromorph based on a native lifeform from the planet.[1]

Appearing only in zero gravity environments, Medusas are best to be avoided. If you get close, they can deliver a devastating melee attack with one of their four limbs. They can also fire projectiles that home in on targets. Therefore, it is better to engage them at long range and kill them before they can attack.

The Medusa is similar to the Nest, except it is a mobile form and much more advanced. Like the Nest encountered in front of CMS Brusilov, it is possible that the Medusa could've been encountered commonly in the orbit of Tau Volantis, had the S.C.A.F. personnel brought the corpses of the Necromorphs for storage similarly to other Necromorph specimens.

It is possible that the Medusa best served their purpose in the oceanic terrain of Tau Volantis during the original Necromorph outbreak and that the ones encountered in the game were ones encased in ice when the planet flash froze. It is unknown how the ones in the zero-g sections of S.C.A.F. storage located at the Alien Machine made their way to those areas, but it is possible that the personnel dumped the Medusas, which they may have thought were dead carcasses, which adapted well to the antigravity environment.

The Medusa does not have a specific death scene of its own, instead Isaac or Carver will be split into pieces if the creature kills them with its limb-tentacle.

If Isaac/Carver was hit by a Medusa's homing projectile, whatever part of their bodies hit will be torn off.

Medusa appearing in one of the zero-g areas of the artifact warehouse.

Medusa as it appears in the limited edition of art book of Dead Space 3. 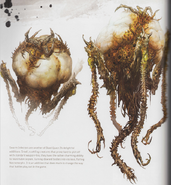 Medusa concept art in The Art of Dead Space