The Mule was an aircraft used by the Sovereign Colonies flotilla during their expedition to Tau Volantis. It's role was most likely to transport the cargo and personnel planetside.

The Mule was encountered during the Prologue and damaged. It crash-landed on a large hill due to a storm and Necromorph attack. Not many details are revealed about it except for the rough estimation of it's total passenger load, about 10-15 people, considering the amount of lockers, corpses and Necromorphs found inside the wreckage.

The Mule was relatively complex despite it's small size. It had a lower floor where the shuttle's emergency hatch was located as well as a second floor where the cockpit was built. The cockpit could be locked with a barred barricade that only could be opened by two persons simultaneously. It also had another emergency door which Caufman and Ackerman used to escape from the ship after it started collapsing down the cliffside that it crashed onto. The ship's two floors are connected with a ladder.

It also had a big ventilation system similar to the other ships and buildings on the planet which was large enough for the Necromorphs to travel.

The Mule's overall appearance was similar to the early 21st century planes. It had wings with jet engines attached and landing gear where more futuristic ships would have relied on anti-gravity methods for landing and takeoff. It's exterior was covered in thermal plating to shield the vessel from the heat of atmospheric reentry.

The Mule and Ensign Patrick Beckford are dispatched by Earl Serrano to transport the Codex to him in the Alien City. The ship escaped from the Necromorph horde, but ended up infested with Swarms that quickly transformed the crew into Wasters which killed the pilots of the ship during a storm. With no one flying it, the ship crashed on the side of a cliff just above the Research Compound.

Later, Privates Tim Caufman and Sam Ackerman arrived at the site to retrieve the Codex as they are tasked by the desperate doctor and are forced to fight the infected crew of the ship off. As Caufman picked the Codex up, the Mule lost it's balance and began to fall apart. Caufman and Ackerman rappelled down the cliff to escape from the wreck with Caufman narrowly avoiding his death by destroying an incoming turbine. At the foot of the hill, the Mule crashed and buried Ackerman under it's heavy debris, killing him instantly.

After rappelling down the cliff, one of the Mule's broken engine turbines would land in front of Caufman and Ackerman, sliding down toward them. If the turbine was not shot and destroyed in time, it would grind them into pieces and explode. 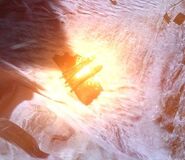 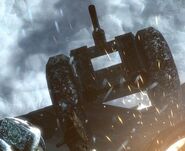 Cockpit with 3 panels with circular shapes displayed, indicating that she must have 3 engines(2 on wings, 1 in tail)

Retrieved from "https://deadspace.fandom.com/wiki/Mule?oldid=151329"
Community content is available under CC-BY-SA unless otherwise noted.