P-Sec, CEC
Nathan McNeill was a P-Sec officer on the Aegis VII colony, present during the Second Aegis VII incident and the Necromorph outbreak on the USG Ishimura.

Nathan was a veteran of the Resource Wars. During a campaign on Scorpio 6, he saved Gabe Weller from a firefight after he was wounded. Upon completion of his service, he became a detective and was assigned to the Aegis VII Colony. He had a cordial history with Weller, presumably from their service in the war. Their personalities are contrasting with each other. The two often argued over the next viable course of action.

During the events of the Second Aegis VII incident, when chaos was only starting to ensue, Nathan was forced to fatally shoot Sam Caldwell who was Lexine Murdoch's boyfriend in order to prevent him from killing anyone else who may have survived the incident in the Megavents. Following that, Nathan became a lead detective on the case regarding Caldwell.

A week after the encounter with Caldwell, with the investigation still ongoing, Nathan was reacquainted with Gabe who served as an officer aboard the USG Ishimura. Weller and his team (Baines, Hutchins and Private Karklins) was sent to retrieve the bodies of the Union Square suicide victims from the colony's morgue and asked Nathan for assistance. When Nathan, Weller and Karklins reached the morgue, they found it empty and started searching for information regarding the bodies' transfers.

The team was beset upon by several aggressive individuals and was forced to return to the P-Sec Headquarters. Reaching the P-Sec headquarters, they witnessed the colony in complete chaos, nearly everyone seemed to be suffering from the same symptoms that affected Caldwell and his fellow miners. Karklins went mad, attacking Weller and Nathan, forcing Nathan to kill him. In desperation, Nathan and Weller barricaded themselves within the headquarters.

The pair headed off to the control room and encountered the Necromorphs for the first time. Nathan assumed that the creatures are of alien origin. When they finally reached their destination, they happened upon Lexine Murdoch hiding from the creatures attacking another person. Despite protests from Weller, Nathan allowed her to join them as they headed for the shuttle bay.

Dismantling the barricade that they set up earlier, they came across the dead mutilated bodies of people who tried to enter the P-Sec Headquarters for protection. Nathan felt responsible for their deaths in spite of Weller's reminder that they are attacked by the very same people who now laid dead.

Shortly after that, they learned that the origin of the Necromorphs are human, mutated into misshapen creatures by something similar in design. They arrived at the shuttle bay in time to see the shuttle crash, killing all aboard and below them. In the debris ahead, they unearthed Warren Eckhardt, a CEC Executive in charge of the mining operation. Eckhardt informed them that he had a personal shuttle waiting on the other side of the colony and led them to it. Along the way, they came across an audio log that speculated that the recently excavated Marker may be the cause for the chaos. The group reached the shuttle and took off, narrowly avoiding the Hive Mind in the process.

Incident on the USG Ishimura[]

Managing to barely crash-land on the Ishimura, the four are forced to hack their way into the ship through a maintenance door. Just before they entered the ship, Lexine was accidentally blown into space by the damaged airlock. However, Nathan managed to pull her back with his Kinesis Module.

Inside the Ishimura, they learned that the entire vessel was already infested with the Necromorphs. They are later discovered by the security guards and during the stand-off, Nathan was shot by a stun gun, rendering him unconscious.

The four awoke in the Medical Bay under the supervision of Chief Medical Officer Nicole Brennan who was charged with checking them for any signs of infection. She accidentally set off a quarantine lockdown and Nathan was forced to maneuver through the air vents to override it manually. With the lock down lifted, Nicole joined the group and they headed out of the Medical Bay.

On the way, the group stumbled across the security team barricading themselves at a tram stop. Nicole stayed with the security officers in case more people showed up and the rest of the group headed to the Engineering Deck.

Nathan suspected that the events taking place on the planet and the ship would have likely never occurred were it not for the Marker which was an assumption that Eckhardt disagreed with. A weakened ventilation cover on the floor gave way and Nathan and the others fell into the sewer system. As they travelled through the sewers, the team lost Lexine to a group of Swarmers. Not long after her disappearance, Nathan, Weller and Eckhardt began to suffer from hallucinations.

Just beneath the Hydroponics Deck, they met Doctor Catherine Howell. There, they are attacked by the Urchin who prevented them from reaching Dr. Howell. She escaped and Nathan and Weller are left to battle it.

After defeating the Urchin, they successfully reached Hydroponics where Nathan spent his time trying to lock the creatures down in the sewer system. To their surprise, they are reunited with Doctor Howell and Lexine. Lexine mentioned that Howell planned to take her to the shuttle bay which was exactly the same area that Nathan and the others planned to visit after Nathan locked the sewers down.

They left Howell in the care of Eckhardt and waited for their arrival at the tram station. When Eckhardt arrived alone, Nathan and Weller are angry that the CEC Executive left Howell to die, despite his protests that she sacrificed herself to the Necromorphs. On the tram, Nathan reluctantly agreed with Weller's plan to split up and search for a shuttle to escape the Ishimura. Nathan and Lexine headed to the Flight Deck while Weller and Eckhardt searched the Maintenance Deck. Nathan and Lexine are unsuccessful in their search for a working shuttle, but received a message from Weller who found a shuttle and headed back.

Lexine and Nathan reached Bay 47 and discovered Eckhardt dead and Weller badly wounded. To Nathan's surprise, Weller explained that Eckhardt was a Unitologist and went mad like everyone else. The only way that they could escape the Ishimura unscathed if someone shut off the ADS cannon.

Nathan took the task himself and headed to the Captain's Nest on the Bridge. During his journey, his hallucinations started occurring more frequently and he found himself incapacitated at moments by the Marker's effects. He nevertheless reached the Bridge and shut down the cannons.

After shutting down the final cannon, Nathan was attacked by the Spider and managed to fend off the creature. As Nathan was ready to re-enter the ship, the creature returned and pinned his right arm to the floor with a spike. The oxygen in his suit was beginning to escape through the tear. Nathan was forced to amputate his own arm in order to save himself and make it back to the others in time.

Nathan managed to make it back to the shuttle, toting a Contact Beam. Despite his loss of blood, Nathan co-piloted the shuttle out of the Ishimura safely. He told Lexine to set a course for the Sprawl and declared that he was "officially retiring" from either P-Sec duties or fighting altogether.

As the shuttle departed, the three heard an outgoing message from the incoming repair crew of the USG Kellion, but could not get their warning through to it.

Shortly after escaping from the Ishimura, Nathan succumbed to his wounds and reanimated in the presence of a Marker signal as a Slasher and immediately attacked Lexine, prompting her to kill him with a P-Sec pistol.[note 1]

McNeill is a P-Sec Detective from the Aegis VII Colony. Unlike fellow survivor Gabe Weller, he exhibits genuine concern for the people he is around and wants what is best for them as a group. He exhibits leadership prowess while on Aegis VII, and, along with Weller, becomes the de facto leader of the group once they board the USG Ishimura. Unlike Weller, McNeill tries to remain optimistic throughout Dead Space: Extraction despite their circumstances. Nathan appears to have feelings for Lexine Murdoch, though much of this is speculation on Weller's part.

Nathan regards his reflection in a Commemorative plaque at P-Sec Headquarters.

"Trying to trap those creatures in the water tunnels." 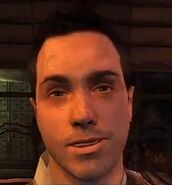