Caused the Necromorph outbreak on the USG O'Bannon

"Alexis, if you get this, I love you. I would never do anything to hurt you, or our son. After the sessions, I keep seeing you, but... you're so mad, so... angry. You're scaring me. I want you to stop. What's happening to me? Please come get me..."
—Nolan's guilt of killing his wife and his infant son.

Nolan Stross was a senior scientist working with EarthGov who served aboard the USG O'Bannon. He was tasked with retrieving and analyzing any surviving pieces of Marker 3A from Aegis VII. He eventually descended into madness after coming into possession of a Marker fragment, and was captured and transferred to Titan Station for further investigation.

The Mission over Aegis VII[]

As a senior scientist aboard the USG O'Bannon, Stross was tasked with retrieving pieces of Marker 3A with the help of a team of engineers and conduct research on the retrieved fragments. Stross became obsessive over a Marker fragment as he conducted experiments on it. He descended into a state of madness and infected a corpse with a Necromorph pathogen under the fragment's influence. As the Necromorph that he created slaughtered his assistant and two engineers, Stross fled to his private quarters in terror. Due to his Marker-induced madness, he perceived his wife Alexis and infant son as Necromorphs and savagely killed them.

Stross was found by Isabel Cho, a crew member he had been having an affair with, and was taken to the other survivors of the outbreak. Stross explained that the Marker fragment had to be destroyed in order for the outbreak to end. The group moved toward the ship's reactor core to do so, but ultimately Stross could not bring himself to throw the shard into the core. Isabel took the fragment from him and destroyed it herself.

Stross and the remaining survivors were apprehended by a rescue team and he was interrogated aboard the USM Abraxis. Since he came into contact with the fragment and was mentally affected by it, Stross was placed in cryogenic stasis alongside another crazed man, Isaac Clarke, and both were taken to Titan Station for research.

The Outbreak on the Sprawl[]

During the Necromorph outbreak that was unleashed on Titan Station, Stross briefly encountered Isaac Clarke. Both men were on balconies apart. Before the crazed Stross could explain what was happening, he spotted a Leaper climbing toward Isaac and warned him just in time. Shortly after disappearing among the chaos, Stross continued communicating with Isaac through video feeds by struggling to explain the situation with the newly-created Marker on Titan Station and the steps on how to destroy it. Stross ran into Ellie Langford, another survivor who also met Isaac during the outbreak. Isaac convinced Ellie to keep Stross alive for him as the three journeyed toward the Government Sector.

Along the way, Stross became progressively worse for wear in terms of sanity and he was haunted by hallucinations of his dead wife and child. His added delusion over the steps caused him to start acting hostile toward Ellie by biting her on the tram and threatening her with a screwdriver. Eventually, under the belief that she would be able to understand Step 3, Stross attacked Ellie by gouging her right eye out with the screwdriver. Soon after, he attempted to kill Isaac with the same tool, Ellie's eye still attached, but failed. Isaac quickly disarmed him and stabbed Stross in the head with the screwdriver, killing him.

It is possible that Stross recovered his senses after being mortally wounded, just like Sam Caldwell stopped having hallucinations and dropped his hostility during his final moments. He whispered "Oh God..." in a somber tone and briefly raised his hand, as if apologizing to Isaac. An audio log directed to Alexis could be found in his dead body.

Ironically, Stross was one of the smartest of individuals when it comes to the Marker's true nature when there have been thousands of scientists trying to figure it out. He recognized his mind's suitability for carrying the Marker's blueprints, as he remarked to Alejandro Borges that the reason he could not see the codes was because he was "not a true vessel".

Stross seemed to be somewhat level headed after the events of the O'Bannon which was very unusual since even the most strong-willed people suffered immensely after the death of a loved one. He appeared to cope with his actions by making himself believe that his wife and son were safe and that he had merely saved them from a pair of Necromorphs, and when questioned about it he refused to recollect the incident in detail. When he spoke to his hallucinations in Dead Space 2, he acted as if they were still alive and with him. This was very similar to Dr. Kyne and his hallucinations of his wife.

For a time, Stross was able to resist the Marker's effects on Titan Station. He knew how to avoid EarthGov's patrols as well as Necromorphs and he was able to hold it together and offer advice to Isaac. His strongest moment occurred when Stross proposed that he and Isaac could destroy the Site 12 Marker. He also seemed aware at the time that the dementia would worsen for him and Isaac, telling him, "Time is running out for me. For us."

As was mentioned in Dead Space: Aftermath, Nolan suffered from claustrophobia, a fear of small spaces and one of the most common phobias.

Stross working in his office on the O'Bannon.

Stross under the influence of the Marker 3A shard.

Stross and Isaac Clarke on a Wanted screen identified as fugitives.

Nolan Stross speaking to Isaac before the security door closes.

Stross imploring Isaac to try and escape with him.

Stross seen along with Titan citizens during the early evacuation.

Stross at the CEC Facility. 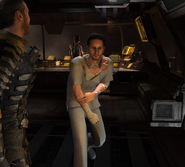 Nolan Stross seemingly looks straight to the player during Chapter 9.

Stross in the Titan Mines.