The PFM-100 Hydrazine Torch Flamethrower, or Flamethrower for short, is an industrial tool used in the extraction of various ores and minerals during mining operations.

It is later re-purposed into a weapon during the Second Aegis VII and Titan Station outbreaks.

The PFM-100 Hydrazine Torch Flamethrower was originally designed to project a liquid hydrazine flame of 500 to 4,000 degrees Celsius onto the layers of ice that trapped valuable ores within comets. When used against frozen meteors, the flame will cause the solidified water within the meteor's cracks to melt, splitting the rock into pieces without much trouble.

The hypergolic fuel canister is clipped to the underside of the torch via a series of metal braces, which when needed, can be forcefully ejected from the tool as a makeshift fire grenade.

Isaac later re-purposes it as a Flamethrower capable of incinerating oncoming Necromorphs.

The PFM-100's long cone of flame can ignite several enemies at once and target individual limbs, but overall, the weapon suffers at long-range. Thus, its best use is immolating swarms of small enemies in close quarters.

Prior to upgrades, the Hydrazine Torch deals very low damage, usually requiring up to several dozens of flame units just to defeat a single Slasher. When upgraded, however, it will make short work of even Enhanced Necromorphs in just mere seconds.

In Dead Space, the Flamethrower's secondary fire shoots a ball of flame that explodes on contact. Upgrading changes the flame's color from yellow, to orange, to blue, indicating its increasing temperature.

In Dead Space 2, the Flamethrower's secondary fire launches a lit canister of explosives that detonates after a few seconds on its own, or immediately upon contact with an enemy.

In Dead Space 3, it is constructed via a blueprint. The new Flamethrower however, is vastly weaker compared to the original version.

Artwork of the Flamethrower

As seen in Dead Space: Aftermath

As seen in DS1 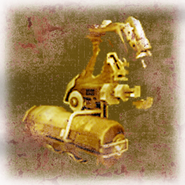 The "Live With The Hot Ones" achievement/trophy 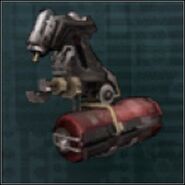 Game render of the Flamethrower

Isaac attacking an Infector with the Flamethrower 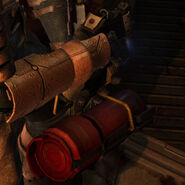 Close-up of the Flamethrower. 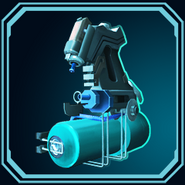