The Patrol Suit appears in Dead Space 2 and in the DLC Dead Space 2: Severed. It appears to be constructed upon a base Security Suit with several modifications such as an alternative camo scheme and re-designed helmet. The suit is worn by EarthGov security officers on patrol duty.

Like the Riot and Elite Security Suit, it is merely a re-skin of the original Security Suit. The Patrol Suit features an orange camouflage scheme and is personalized with the security logo and the name G.Weller printed onto the shoulder, back armor and neck collar, respectively. However its appearance differs in Dead Space 2: Severed, the helmet is changed significantly now featuring lenses rather than slits for vision. 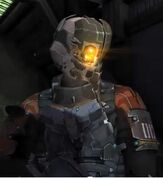 As seen in Dead Space 2: Severed 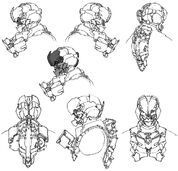 Concept art of the Patrol Suit
Add a photo to this gallery
Retrieved from "https://deadspace.fandom.com/wiki/Patrol_Suit?oldid=151149"
Community content is available under CC-BY-SA unless otherwise noted.