Pregnants are specialized Necromorphs. They are named due to the enormous sac that extrudes from their abdominal area, the contents of which are other, smaller forms of Necromorphs which burst forth when the sac is damaged.

Pregnants appear to be created from a single human corpse, albeit one that has been radically mutated.

The skull's lower jaw has been detached, and what appear to be tentacles now hang from the mouth.

This Necromorph sports two massive arms coming out from its back, each ending in a large bone-like scythe, which is used to slash and rend an opponent in the same manner as a Slasher does. The host's human arms appear fused into the massive sac that has developed on the torso. This sac hosts smaller Necromorphs inside of it. When heavily damaged, Pregnants tend to claw open their own abdominal sacs in order to release their spawn in an effort to ensure their victim's demise.

Their abdominal sacs usually host Swarmers or Swarm but sometimes they may carry deadlier payloads of Necromorphs, including Lurkers as well as small creatures composed of miscellaneous body parts, identical to those that come from Dividers .

In order to accommodate its great weight, a Pregnant's legs have become shorter in order to balance the creature by lowering its center of mass, and the overall leg structure has been altered. As a result, although their weight hinders their speed, they can move at a brisk enough pace to out-walk their target when they are determined.

Pregnants, unlike most Necromorphs, do not commonly travel in packs, however they do tend to travel with other Necromorphs. Unlike Lurkers , Pregnants can really wreak havoc when they have Slashers or otherNecromorph forms accompanying them.

Pregnants in Dead Space 3 are different in appearance from previous games. Their bodies are overall mostly one color and their abdominal sacs appear much more swollen. When their sacks burst, they release the Swarm rather than Swarmers.

The Pregnants have two death scenes for Isaac, although one of them is not often considered as a "Pregnant death scene" because the ones who kill Isaac are actually their spawn.

Finalized concept art of the Necromorph.

Isaac faces off against a charging Pregnant.

Isaac fighting off a Pregnant. 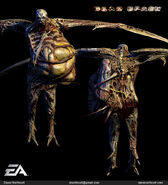 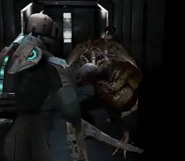 Pregnant, encountered in the Mobile Game.

Model of Pregnant in X-ray.