EarthGov began Project Telomere three years before the Necromorph outbreak on Titan Station. Isaac Clarke and Nolan Stross were its primary subjects, though there are others. Station governor Hans Tiedemann oversaw the project while scientist Foster Edgars undertook much of the research. EarthGov troops augmented the Titan Station Security Enforcement Guard.

Through the use of the NoonTech Diagnostic Machine, Project Telomere's staff were able to study signals and patterns in the human brain related to Marker-induced dementia and build their own for study. As explained in one of Tiedemann's logs, those involved with the project came to the consensus that humanity could no longer sustain itself and needed these technologies to survive.

Project Telomere came to an abrupt end when Isaac Clarke successfully destroyed the Site 12 Marker. All of the materials and equipment are vaporized in the blast that destroyed Titan Station. 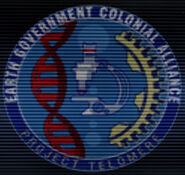 A seal in one of the facility's elevators.

A data collection laboratory tied to the project.