"God, I thought it was finally over when I closed the bulkhead doors. Me and Miller, we were the only ones left. Everyone else had been killed and...and...I dunno WHAT the hell happened. Anyway, Miller goes around the corner, and that's when I heard it. That sick, wet snarl. Miller started shooting his plasma cutter as I ran to assist. I was too late. It was just standing there. Looking at me with eyeless sockets! And Miller was on the ground...his head corroded away by the bastard's vomit."

The Puker is a unique ranged Necromorph encountered throughout the events of Dead Space 2 and later in Dead Space 3 as well.[1][2]

The Puker's digestive acids drastically alters their appearance, melting and merging their flesh. The host's original legs have entwined, and a clump of intestines, nerves and muscles have grown down to form an additional leg. Its fingers have merged into three long claws on each hand. Its eyes are missing, and its jaw has fused with its neck, freezing its face in a hollow, blank stare. On its torso, the lungs are clearly visible and appear yellowish in color, storing a limited quantity of bile to be ejected from the mouth. What remains of the flesh on the Puker's body hangs loosely around its frame. The creature's constant, messy expulsion of said caustic fluids has melted away its facial features and the skin and muscle tissue of its torso, revealing its organs. A sickening gurgling and choking sound forwarns one of a incoming Puker, this sound rising  into a shriek as it prepares to lob acid at foes.

The Puker is quite fast for its physical appearance, being able to charge quickly up to the player and unleash a swift rain of acid.

The Puker has four forms of attacks: first, it shoots a ball of corrosive bile over a long distance which burns victims and corrodes/rusts armor, preventing those who are hit by it from running. The Puker's second attack is a projected stream of bile towards its prey at a medium to close range. The third is a melee attack using its claws, and the fourth is a grapple attack in which the Puker grabs the player by the head and arm before vomiting on their neck and mouth in order to remove their helmet. The Puker also sports a unique defense mechanism in which their severed appendages spurt corrosive fluid upon dismemberment.

Pukers in Dead Space 3 differ significantly from those in the previous game. The basic body shape and form is the same, but it is now a strange green color and is apparently much faster, reacts quicker and is more aggressive, even on lower difficulties. It uses the same form of attacks and groans in the same fashion as before. All of these variations may be due to the fact that they are aged longer, and much more decayed. There is not a reason told in-game as to why they are so aggressive.

They appear to be wearing some sort of green clothing, possibly the same uniform the S.C.A.F Fodders introduced in the prologue of Dead Space 3 were wearing. The face has completely caved inside the skull as well as the hands look much more smooth than the fresh Puker variant. Their legs are intact and they don't have a third leg made up of intestines. They still have their host's right boot but the left leg has mutated completely into two toes. The rib cage is still visible with the lungs being turned into green jelly-like substance.

In Dead Space 2 Multiplayer, the Puker has a six-second respawn timer. The Puker is a very deadly adversary. They have a chargeable puke attack which deals more damage the longer you hold it, but causes the puker to move slower. When released this charged attack can easily take out half an enemies health, which is a death sentence for any damaged Human players. They also posses a very deadly and rapid melee attack, which, if used on an unsuspecting human, can bring them from full health to zero before they can even turn around or react. The best strategy is to hide in the corner with the charged puke, then release it on an unsuspecting approaching enemy and begin melee assault.

Normal (along with the mummified version)[]

Normal variants are the most common Pukers encountered in Dead Space 2 and 3. The Dead Space 2 variant appears to be missing both eyes and the right leg  appears to have been moved next to the left one  while a new leg made from muscle has grown in its place. The chest has been ripped open to make place for the sack that stores the Puker's acid. The rest of the organs have melted into some sort of tissue. The Puker's jaw has been removed possibly by the acid and the arms have morphed into large claw-like appendages. The Dead Space 3 variant mostly still retains its host's clothes and is very green. The head is either covered by a hood or the face has collapsed inside the skull. The arms have met a similar fate as the Dead Space 2 variant, but its legs appear to still be intact. The Dead Space 3 variant does not have a third leg made out of intestines. 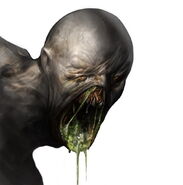 A full-body concept art of the Puker.

The Puker as seen in Dead Space 2's Dementia trailer.

Full body overview of the Puker

A Puker spitting at Isaac.

Featured in the multiplayer trailer.

A Puker's acid is highly corrosive and easily burns through skin. (In-game render of Isaac's face after getting it melted)