Designed to hack and slice through solid rock, the RC-DS Remote Control Disc Ripper is an extremely dangerous tool. In less skilled hands, it's an accident waiting to happen, ejecting incredibly sharp diamond-coated tungsten blades at up to 17,000 RPM to cut through anything in front of it.

The Ripper is a handheld cutting tool that launches a circular sawblade, which is attached to a miniature gravity tether. The Ripper's primary function launches a sawblade that hovers in front of the tool for a default 7 seconds prior to upgrades, while the secondary function ejects an un-tethered saw disc at high speed.

The Ripper, even when unupgraded, is tremendously powerful, as it deals constant damage to whatever the blade connects with.

The Ripper is an industrial saw that can shred through just about anything. Its rounds are actually small radial blades that shoot out and then spin at a distance. After firing off a round, the blade will spin at a distance connected by a miniature gravity tether allowing the player to choose the blade's path. Not only does the Ripper act as a shredder, but it can also act as a buffer between the player and approaching Necromorphs while in close quarters. 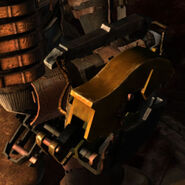 Another angle of the Ripper 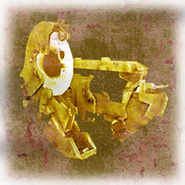 The "A Cut Above" achievement/trophy 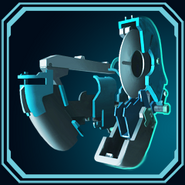 Concept art of the Ripper from Dead Space 3
Add a photo to this gallery
Retrieved from "https://deadspace.fandom.com/wiki/RC-DS_Remote_Control_Disc_Ripper?oldid=149778"
Community content is available under CC-BY-SA unless otherwise noted.