This article is an overview page. You may be looking for Marker 3A

"The Marker is glorious and divine, you - you know that."
—Capt. Benjamin Matthius[1]

A Red Marker is a reverse-engineered copy of a Black Marker or its respective copies. It was vital in the process of Convergence.

It should be noted, however, the term "Red Marker" stemmed from the coloration of artificially-made Marker duplicates and not a universal description.

No matter the species, a Black Marker can influence any planet's given inhabitants (usually the apex/dominant species) to create duplicates of itself under the guise of limitless energy. Unaware of the manipulation, the inhabitants' typical reasoning for creating duplicates was usually the harvest of a natural resource for energy purposes. In reality, the duplicate Markers merely propagated the spread of the Necromorph life form and its subsequent Convergence Event.

By design, the artificially-made Red Markers resembled and functioned like their precursors. Like all other Markers, they resembled the double helical structure of Z-DNA, one of 3 helix forms that active DNA could take.[2] A visible difference, however, was the red hue which they carried.

When activated, the copies emitted a highly tuned frequency to its surroundings that, when coming into contact with dead organic tissue, reanimated the cells, creating the Necromorphs. Even when a Marker was destroyed, unless utterly obliterated, the carrier wave would continue emitting from its shards. Once all of the fragments of a Marker were destroyed, the signal would stop and all of the Necromorphs created would be destroyed, reduced to an inanimate sludge unless brought back into the range of another Marker.[3][4] The signal also created a small "dead space" around the Marker that caused the Necromorph recombination effect to go dormant, preventing the creatures from touching the object.[5][6]

The effects of living humans exposed to this frequency vary. A majority of humans are unable to decipher the signal, perceiving it as mere "noises", images and meanings without coherence which ultimately caused the affected individuals to become paranoid and prone to constant hallucinations. It was hypothesized that this was attributed to some undefined aspect of the individual's intelligence.[7] Notable examples of individuals able to somewhat decipher the signal can be seen in Dr. Kyne and Isaac Clarke as Marker 3A urged them both to return it to its proper place on Aegis VII, and later in Clarke and Nolan Stross as the Site 12 Marker urged them to use the NoonTech Diagnostic Machine.

A Red Marker tended to create the illusion of a loved one. Dr. Kyne often conversed with his dead wife, Kendra Daniels repeatedly saw her dead brother and Isaac Clarke saw his deceased girlfriend. A Convergence Event could be triggered by a single Red Marker alongside the mass of dead tissue created by the Necromorph contagion that it perpetuated. The number of Red Markers present may merely assist in hastening the process.

The Earth Government, despite its apparent awareness of a Red Marker's nature and of the previous disastrous attempts to control it by the Sovereign Colonies, continued to manufacture the copies in the name of creating energy resources or conducting experiments, using the codes stored by Marker 3A in the minds of people like Isaac Clarke and Nolan Stross. As a result, the number of test labs housing Red Markers behind shrouds were targeted and used against them by the likes of devout Unitologists like Jacob Danik and his Circle.[8]

Marker 3A on Aegis VII.

Marker 3A is brought back to Aegis VII from the Ishimura by Isaac.

Marker 3A after being returned to its pedestal.

A promotional image for Dead Space: Extraction depicting the four survivors standing before Marker 3A.

Profile of Marker 3A.

The Site 12 Marker after initiating the Convergence Event.

Red Markers on Tau Volantis as seen in the Take Down The Terror TV Spot. 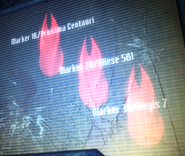