The Research Compound was a base of operations of the S.C.A.F Science Division on Tau Volantis. The compound, facing north, was located near a large cliff-side at the top of the mountain that hid the Alien Machine within, the machine was located east of the Research Compound Silo. Outside the base, alien-made Red Markers can be found all over the surface, trapped inside the walls, the ground and even inside the elevator shaft between the research base and the Machine.

A thick wall surrounds the base protecting it from the outside, with a additional wall along with a built-in checkpoint located at the entrance of the silo leading to the Machine below.

A lift system was built across the mountain side all the way down to the base surrounding the mountain as well as an underground tram system to allow easy travel between the S.C.A.F colony.

Every high-ranking superior officer carried a key to access the entire facility, that Isaac later acquires to himself.

Another elevator and a ventilation system was also built inside the mountain, leading all the way to the large chamber containing the Machine.

As Scenario Five was commenced, the facility was abandoned and the outside lift was destroyed, trapping anyone up on the mountain.

The Research Compound housed a variety of different sections dedicated for different tasks.

A drop off point for the lift is at the base of the Research Compound. A hut of presumably the maintenance crew is located there.

A labyrinth of corridors is carved into the icy terrain of the mountain riddled with Markers. The entrance to the Paleontology Sector is located next to the compound gate.

Some sort of an overpass is located between the exterior entrance and the Biology Sector entrance.

The side-entrance of the Research Compound.

Add a photo to this gallery

View of the distant mountains on top of the Alien Machine.

A drop-off point of the old lift system, at the base of the mountain peak, near the Research Compound. (notice the Paleontology Sector building in the distance.)

A building possibly containing the quarters of the crew that worked on the lift (The building is in-accessible).

More of the lift system leading further on top of the mountain to the base. 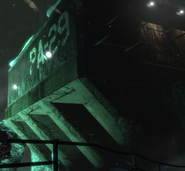 Some of the outer support structures of the Paleontology Sector.

The entrance of the Research Compound, going through the exterior. 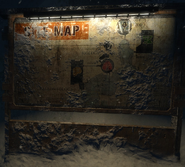 Security pass to the entire compound.

Top of the mountain.
Add a photo to this gallery
Retrieved from "https://deadspace.fandom.com/wiki/Research_Compound?oldid=151431"
Community content is available under CC-BY-SA unless otherwise noted.