This article (Resource Integration Gear), has one or more disputed facts. Please visit the Talk Page for more info, and clean this page so it meets wiki standards.

Resource Integration Gear, or RIG for short, is an integrated health management and strength augmentation system that assists users in previously impossible and dangerous environments.[1]

RIGs monitor the lifesigns of an individual. Developed from medical monitoring systems designed for elderly patients, it has found common usage among the adult population. [2]

All RIGs share several basic features. A spine-mounted display serves to indicate the user's general state of health as a glowing segmented bar which depletes as the user takes damage. When the user dies, it emits a "flat-line" sound similar to an EKG, which is loud enough to alert others within earshot of the RIG wearer's demise. Holographic projectors mounted on the wrists can create a two-dimensional display in front of the user, to display whatever they might need to see. The size of the display can vary depending upon the data it is accessing. It can also project a colored line to guide the user to a destination, be it a location or a service like a store or workbench. It is capable of two-way audio and visual communication. RIG users can be individually tracked if need-be, even if dead. Finally, RIGs can be used as a form of biometric lock, only allowing specific RIG users access to designated areas, though such scanners fail to take into account whether the user is living or dead. RIGs can be upgraded at a nano-circuit repair Upgrade Bench using Power Nodes. Depending on the RIG, Nodes can be used to upgrade air supply, resilience to damage, or enhance the strength of Kinesis.

RIGs vary greatly depending on the user's occupation and status. Civilian RIGs are typically little more than the spinal display and wrist projectors attached to basic clothing. Engineers and other service personnel wear similar garb, but often possess Kinesis and Stasis modules to aid in their profession, the latter with the requisite monitor mounted to the right of the spinal display. For more dangerous work, RIGs are installed in full-body suits. These suits, in addition to the RIG's basic functions, have features such as an internal oxygen supply for work in a vacuum, gravity boots, and thrusters for zero-gravity movement, and armor to protect against damage from various sources.

RIGs appear to be ubiquitous throughout society. Very few people are shown not to possess them, which suggests that most professions require some form of RIG to be used. Various RIG-equipped suits can be purchased from stores, provided the user has clearance and the proper blueprints. More advanced suits offer benefits like increased storage space, damage resistance, and "bonuses" to weapons, stasis, kinesis, or store purchases.

The most distinctive feature of the RIG is its health management system, which actively displays the wearer's health in real time via a segmented colored bar that runs along the spine of the wearer, allowing for interface into the wearer's nervous system, and therefore the ability to detect the wearer's health status. These bars will drain and refill depending on the user's health. If a RIG wearer dies, the RIG will give off a flatline sound, identical to an alert cardiograph. The bar changes color depending on the user's overall health; aqua-blue for above 75%, green for above 50%, yellow for below 50%, and red for below 25%. It will blink when the user is near death.

It is unknown what it bases the wearer's health on, be it a rough estimate of damaged body parts or the functionality of internal organs. It is known that if the user of the RIG is harmed, the RIG automatically applies any carried health packs to the damaged area. The RIG could also potentially show signs of bacterial or viral-based illness.

Utilizing the Holotech Operating System, a RIG has the ability to project a holographic display, which is projected a few feet (about a meter) in front of the RIG wearer. The display also moves with the user if the user walks around at all while it is projected. These displays are used for various features. The main use of the display is for RIG users to communicate with one another through live video chat, or to send live audio messages to one another. The RIG also allows its user to store text logs and the like within the RIG's built-in memory, which are displayed in widescreen projections to make reading easier.

This feature projects a colored line on the environment that guides the user to objectives, save points, Benches, and Stores. In Dead Space, this system included a 3D map and the line guided users to objectives. In Dead Space 3, Suit Kiosks replaced the Stores for navigation, and guidance to a Save station was replaced with an autosave feature

Stasis Module
Stasis is used to severely decrease the speed of machinery. It is usually used to slow down machinery that is malfunctioning, allowing a safe approach (for example, mechanical doors rapidly opening and shutting, so Stasis would be used to slow the door down to a safe pace).

Kinesis Module
Kinesis allows the user to lift heavy objects with ease. It will allow the user to lift all but the heaviest of objects as if they weighed nothing. If some machinery is located on a track, Kinesis can be used to roll it along that track if the object is too heavy to move via conventional means.

Oxygen Storage
The engineering suits will become airtight when entering a vacuum (or an area with a toxic atmosphere), allowing the user to breathe using oxygen stored in the suit. This oxygen will refill once the user either enters an area with normal air again, or makes use of an oxygen refilling station or air can. Areas in a vacuum that require long periods of work will often be equipped with Oxygen Recharge Stations, which will automatically refill the suit's oxygen storage to the maximum, and can be used an unlimited number of times.

Zero-Gravity Boots
Allows the wearer cling to metal surfaces when in zero-gravity environments.

Radiation Protection and Geiger Counter
Engineering suits seem to offer protection from radiation and have a Geiger counter built in. This can be seen when Isaac must Clear Radioactive Material to access the USM Valor

This suit is basically clothing with communication modules on the wrists and it offers little protection.

Like the civilian RIGs it offers little protection and is basically clothes that come equipped with communications. It seems to mostly be used to monitor the health and status of hospital patients while restricting their movement when necessary; the suit is also equipped with drug injectors, as seen via tubular attachments near the neck area of the RIG, most likely to administer medication without hampering the wearer's mobility.

The military suit is a heavily armored exosuit used by the Earth Defense Force of the Earth Government. Developed and manufactured solely for the use of the military, the military suit provides greater protection and array of tools such as built in kinesis and stasis modules for its wearer. The SCAF variants include the Elite and the Legionary suits.

The mining suit is a more robust and armored iteration of the standard engineering suit. Like the engineering suit, it covers the head and body tight enough to be used in a vacuum and comes with the standard gravity boots. The most noticeable difference between the two are the narrower visor openings on the helmet and more body armor over the front, as opposed to all over with the engineering suit. These differences reflect the likelihood of injury while working, and the areas in which danger is usually presented within each respective field. A SCAF's archeologist suit is an example these RIG's.

Much like the military's RIGs, the security suits are heavily armored exosuits and are used for the police force of the Earth Government. These suits come in several variations, each depending on the occupation and hazard. These suits share an accessory with the military's suits: built in stasis and kinesis modules. Some come equipped with flashlights on the shoulders and one variant has a helmet that comes with lenses instead of visor slits.

In the primitive days of space travel and the CEC, this was one of the first RIGs of its kind. This bulky RIG does not have thrusters on the shoulders like later models, and its holo-projector on the chest is small compared to later models. Also, unlike other later models, the suit's oxygen tank isn't integrated in the suit, but is placed on the shoulder.

These RIGs are for mere space travel, so it has no armor plating, but it still has the skintight sealing to prevent decompression in the suit. It is commonly used by astronauts working on the shuttles and space stations. The EVA suits are an example of astronaut RIG's.

This suit relies on highly classified technology and is intended for elite forces operating in dangerous situations and the harshest of environments. Like all other full-body vacuum-rated suits, the Advanced Suit is self-sealing on most occasions, meaning that it will seal itself if punctured or otherwise damaged in a manner which compromises the wearer's exposure. This allows operators to work in the vacuum of space or other similarly hazardous environments.

Concept art for the miner RIG

Concept art for the civilian RIG

Details of the Level 3 Engineering RIG

RIG Designs from the mobile version of Dead Space. 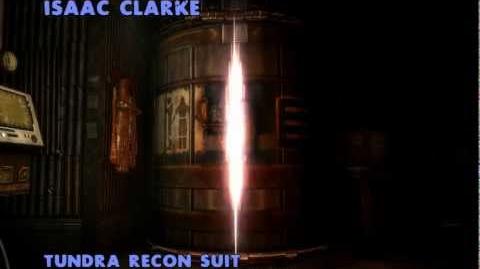 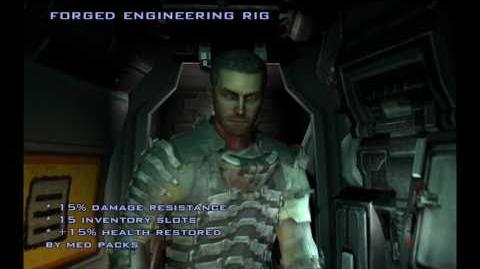 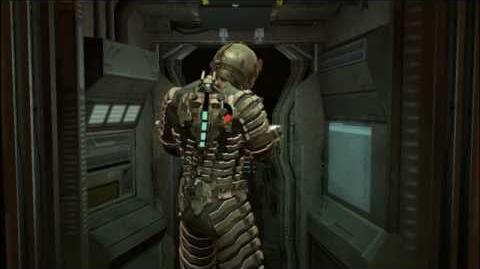 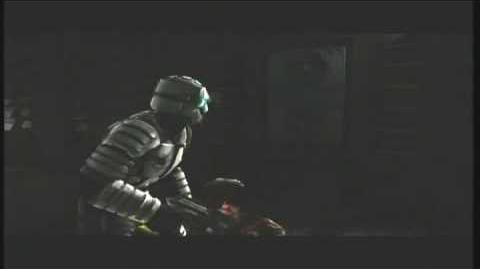