Dead Space Wiki
Register
Don't have an account?
Sign In
Advertisement
in: Articles with Spoilers, Characters, Deceased,
and 5 more
English

Robert H. Norton was the captain of the USM Eudora and an officer of Earth Government's Earth Defense Force.[2] He helped Ellie Langford during her mission on Uxor and Isaac Clarke on his quest to destroy the Markers during the year 2514. He is the secondary antagonist of Dead Space 3.

Almost nothing was provided on Robert Norton's military career or personal life prior to the events that took place on Uxor, Keyhole Station and Tau Volantis. In some point, he served alongside John Carver on Haven Prime. A brief conversation with Clarke suggested that Norton and Carver stood as the "last battalion" of the Earth Government's Defense Force in the wake of the relentless attacks committed by the Unitologist group called the Circle led by Jacob Danik.[2]

Ellie Langford and Robert Norton met during the time that he and Carver are stationed on Haven Prime. Following her break up with Clarke, the two became romantically involved. When Damara Carver discovered information on Marker research from the Sovereign Colonies, Ellie and Robert chose to help the archaeologist unearth more information. Some time after her discovery, Uxor was attacked by the Circle and Jacob Danik. Norton and Ellie arrived to the planet too late to save Damara or her son, Dylan, but persuaded Carver into getting the doctor's complied data to safety.

Norton and the Eudora descended from high orbit to get Ellie and Carver off Uxor before Danik could apprehend him. When Carver demanded to know what was going on, Norton was quick to tell him that the information was "need-to-know" only. Regardless, Ellie told him what Damara was doing and how she planned on helping them to destroy the source of the Markers. Once Carver decided to help them, the Eudora landed at Ptolemy Station where they used the station's triangulation system to locate the source of the "master signal" of the Markers. Realizing that they need a shock beacon and a station to get there, they headed for Keyhole Station.

In transit, Ellie tried and failed to decode the Marker language found in Damara's research. Ellie suggested that they should contact Clarke as he was the only person that she knew who could decipher the language of the Markers. Norton objected, believing that Clarke's status with the Unitologists and insanity would merely complicate their mission further. Ellie, believing that Norton was merely jealous stormed off to speak with Carver.

When they arrived at Keyhole Station, Norton decided to take the lead despite his lack of familiarity with the environment. It was not before long that the crew was attacked and separated by the combined forces of the Unitologists and the Necromorphs already aboard the station, resulting in the loss of everyone, but Norton, Carver and Ellie. Norton led himself and Carver into further danger when he continued to refuse Carver's requests to lead, despite the soldier's firsthand knowledge of the station. When he was saved by Carver, the sergeant told him to take his advice next time. Unable to reach Ellie, Norton grudgingly agreed with her plan to go ahead to Tau Volantis without them. Before she traveled through the ShockRing, the two apologized to each other over the dispute about Isaac.

Norton used the Eudora's armament to destroy the station and the ShockRing, preventing Danik from following her. Without hesitation, he told Carver that their next move would be finding Isaac Clarke.[3]

Norton, accompanied by Carver located Clarke at his apartment on the New Horizons Lunar Colony. They infiltrated and subdued the engineer at gunpoint. Norton demanded Isaac's expertise in a mission involving the Markers. Following Isaac's refusal, Norton persuaded him by telling him that Ellie requested them to find him. When he explained that she was missing, Isaac grudgingly accepted the task and the three set out through the streets of the Lunar Colony.

As the Unitologists overwhelmed them in an attempt to murder Isaac, a suicide bomber destroyed their car, separating Norton and Carver from Isaac who landed in the sewers below. Norton and Carver fought to regroup with their target. Not long after another Necromorph outbreak was triggered by the Moon's Marker, Norton and the USM Eudora arrived to extract Isaac from the top of a train and shocked out of the system.[2] With the three on board, Norton ploted a course for Tau Volantis.

Arriving in the planet's system, Norton and his crew discovered the remains of the Sovereign Colonies warships with an SOS signal transmitting from the CMS Roanoke. Moving closer, the Eudora strayed into a minefield and sustained heavy damages. Isaac went to acquire an EVA Suit while Norton and Carver sealed off a ruined doorway. The destruction of the Eudora hurled the group into space through the debris field.[4] Norton and Carver guided a boxlike container holding Rosen and Locke through the debris toward the distress signal.

Guiding the box into a cargo bay in the Roanoke, Norton and Carver stayed behind to open the box and release Rosen and Locke while Isaac searched the ship for Ellie. His crew was eventually ambushed by an ancient swarm of Necromorphs that were sealed in the abandoned ship for two centuries.

They narrowly held the monsters off and barricaded the room while Isaac restored the power to the ship. Norton and Carver arrived at the sealed room moments after Isaac, finding Ellie, Jennifer Santos and Austin Buckell.[5] Overjoyed to see her, Norton embraced and kissed Ellie. Assuming that the mission was completed, Norton declared that they are all leaving, but Ellie told him otherwise. She believed that there was something important in the admiral's quarters that needed to be investigating.

Discovering a decommissioned shuttle, the CMS Crozier, Norton once again tried to persuade Ellie into leaving Tau Volantis, but she remained determined to see her mission through. Frustrated, Norton contacted Isaac privately, imploring the engineer to get Ellie to see reason. He exposed his jealousy to Isaac, reaffirming that Isaac and Ellie's relationship was over and she was in love with him.[6] Once the Crozier was repaired, the crew made a break for the planet. The debris field quickly damaged the shuttle, shattering the windows and igniting the shuttle as it plummeted into the atmosphere. The shuttle split apart, separating Isaac from the others.[7]

Norton and the team searched for shelter from the freezing environment of the planet. They managed to find snow suits, but there are only enough for Norton, Ellie and Santos. They are forced to leave an injured Buckell behind when he refused a snow suit.[8] Norton and the others made their way to a research facility where they are attacked by a swarm of Necromorphs.

After an unspecified time after crashing on Tau Volantis, Norton made a deal with Danik, handing over Isaac in exchange of the safety of the rest of the crew. Danik would give him a ship and allow them to leave Tau Volantis unharmed.[9]

When Isaac reunited with the group, Norton openly questioned Ellie's feelings for himself and Isaac which almost resulted in open conflict between the two men.[10] On the way to the warehouse complex, the group was attacked by Danik's men and separated from Isaac again. Norton remained dubious about the team's efforts to find the Codex and the Machine, citing that their knowledge on the device was not greater than his own.[11]

During their examination of the Nexus corpse, Isaac caught Norton contacting someone, but when he was questioned, Norton said that it was nothing important. Norton begrudgingly aided in search for the Marker signal within the Nexus' body. He lowered Isaac down into the opening of the creature's body. The experiment was a success. Santos managed to locate "a thousand" signals beneath the planet's surface. The only way to reach the signals was to climb to the second dig site further up the mountain.[9][12]

Norton waited until Ellie and Santos headed off to set up the climbing gear before he left Isaac trapped in the elevator. He was determined to take control of the mission and "save" Ellie. However, Norton and Carver are ambushed outside the complex by Danik and his followers moments before Isaac joined them. Danik revealed that Norton allowed them to track the team to the planet through ShockSpace.

When Danik decided to kill them, Norton rebelled. The leader was going back on his promise to allow Norton and the others off the planet if Isaac was captured. Isaac intervened, preventing Danik from executing Norton. The three engaged in combat with the Unitologist soldiers until the Nexus appeared. Carver and Isaac managed to keep Norton out of danger, almost at the expense of Isaac who was nearly devoured by the creature. Isaac killed the Nexus from within its body. After he escaped, Norton attacked him in a fit of rage. He blamed Isaac for dragging them to the planet and tried to kill him. Isaac retaliated in self-defense, shooting Norton in the head with a semi-auto SMG.[9]

Despite everything Norton did, Isaac showed genuine remorse for killing him, while Carver deemed it necessary as he had turned into a threat for the whole group. His death briefly shattered the trust of Ellie and Jennifer Santos on the protagonists; Jennifer even had an emotional breakdown, shocked at an ally dying by infighting rather than by the hands of the enemies. After the initial grief, Ellie recomposed herself and resumed to guide Isaac, stating that she "didn't want to lose Norton and you (Isaac) at the same day".

Norton is later mentioned once by Isaac when he is pursuing Danik with the Codex. Carver notes that Isaac is chasing after Danik vengefully, with a blind rage, thinking that Ellie is dead. Isaac promptly answers Carver saying that Norton was right at least in one thing: that going to Tau Volantis was a one way trip, and if he is gonna die, he is taking Danik with him.

Later, he reanimated as a Necromorph and appeared as a hallucination of his former self. When Isaac/Carver approached, it turned out to be Norton who reanimated as a Slasher and promptly attacked them along with some Enhanced Pregnants. Fitting, as Carver commented that Norton "Won't stay dead for long" after Isaac kills him.

As a Slasher, Norton showed a behavior very different from most Necromorphs: he will not attack until the protagonists approach him, while he is seen as a hallucination he will just stand still looking at them. Also, Norton's mutation was physically different: he didn't develop the extra arms Slashers usually have and his head still had the bullet wound. He boasts a ridiculous amount of hitpoints, even higher than that of Enhanced Slashers, easily becoming one of the hardiest non-boss Necromorphs in Dead Space 3.

If the player failed the button sequence, Norton would shoot Isaac in the head with his pistol, killing him instantly. If the sequence was completed, Isaac would place a shot right in the middle of Norton's forehead, killing him instead.

In Dead Space 3: Awakened, Norton appeared as a Slasher and attempted to execute the player. If the player failed the button sequence, the infected Norton would use the default Slasher Death Scene.

Norton as he appears in space. 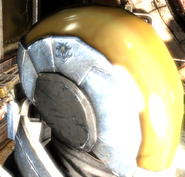 An EDF symbol on Norton's helmet. 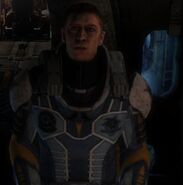 Norton as seen on the CMS Crozier.

Norton having a conversation with Danik.

Norton, promptly after being shot in the head by Isaac

Norton as a hallucination in Awakened.

Norton reveals himself as a Slasher.

Character render of Norton in his first suit.

Another render of Norton in Tau Volantis.