"The SH-B1 Plasma Saw is designed for dissection of heavy duty materials in both on and off-site locations. Users are advised to always wear protective clothing when the saw is in use."
—Description in game.

The SH-B1 Plasma Saw is a mining tool used during excavation, ore extraction and mining jobs. The saw is exclusively featured in Dead Space (mobile).

The SH-B1 model of plasma saw is a hand-portable cutter capable of chopping through ore, metal and even Necromorphs' flesh. Featuring a variable-output rotary system of superconducting teeth, hundreds of joules of electrical energy per second flow through a plasma sheath riding magnetic fields. Upon contact with solid matter electro-thermal disruption causes intense localized warping and heating, cleaving with a touch. To prevent binding or dangerous vaporization that might occur during prolonged operation using a single blade, the SH-B1 employs a series of moving teeth. This feature scoops out the burning material to make room for further cutting until the plasma saw eventually breaks through. This also allows cooling of the superconductors, reducing wear.

During her time at the Sprawl, Vandal was given one of these tools to use in completing a project for the Church of Unitology. After the supposed project's failure, Vandal continued to use the tool during combat against Necromorph. Vandal uses the tool mostly during close encounters with the Necromorphs. More specifically, when she is either tackled, grabbed or is in close proximity to a Necromorph. Most of Vandal's counter-attacks involve using the Plasma Saw, such as when she counters a Slasher's grab by pushing the Necromorph back then slicing its arm off with the Saw or when she grapples with a Lurker, she pulls its tentacles off her and uses the Saw to dismember all three tentacles and then punts the Lurker.

A similar tool is used by Michael Altman in 2214. While called a "Plasma Cutter", it is described as a two handed, close range, cutting weapon, that uses a plasma blade. It is possibly a common predecessor to both the Plasma Saw and the Plasma Cutter.

Concept art of the Plasma Saw found in game. 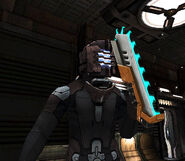