The SWS Motorized Pulse Rifle is a military-grade, triple-barreled assault rifle with a rapid rate of fire and large magazine ammunition capacity.

The Pulse Rifle is the standard-issue service rifle of the Earth Defense Force, and is also common among EarthGov security forces, corporate security officers, and sometimes civilians.

The Pulse Rifle discharges ultra low caliber rounds at hypersonic speeds, each carrying tremendous amounts of kinetic energy: these rounds are designed to squash (or "mushroom") on impact, transferring their energy to the target and causing immense localized trauma. This effect is immediate and pronounced in unarmored targets, with impacts liquefying soft tissues and fracturing bones; in the event that targets are not directly killed by fire, they will be rendered incapacitated by grievous wounds and pronounced hydrostatic shock. As well, such low caliber rounds render the Pulse Rifle an ideal weapon for shipboard combat, as they lack the penetrative power necessary to rupture ship hulls. On the other hand, this leaves the Pulse Rifle variants that have been seen so far totally inadequate for the task of piercing tough body armor as the rounds simply bounce off the mining suits still worn by some Necromorph Slashers and the chitinous armor from Brutes in Dead Space 2. Kinetic shock absorbers are speculated to have been implemented into the weapon's stock, as Isaac/Gabe experiences little to no recoil even from protracted firing. When the Pulse Rifle is reloaded, the entire front end hinges forward, ejecting the spent cartridge and a new one is inserted into the magazine well.

There are three major variants of the SWS Motorised Pulse Rifle that have been seen as of yet: although all three possess identical primary modes of fire, they are differentiated by their distinctive modes of alternate fire.

The first variant of the Pulse Rifle is seemingly used extensively in shipboard combat operations, often by corporate security officers and EDF Naval/Marine personnel. The barrels turn 90° outwards, with the user pointing the gun upwards, meaning that all three barrels are facing three different directions. By holding down the trigger, the three barrels spin around the front part of the rifle, sending a spray of bullets all around the shooter. This variant of the standard SWS Rifle, capable of 360°, radial fire, is used to effectively engage targets on all sides of the user.

A second variant of the Pulse Rifle is capable of firing charged "shotgun-like" flechette blasts, changing its barrel configuration into a hexagon gear-like shape with seven laser sights instead of the normal four, potentially indicating that it doubles the number of barrels to six. When fully upgraded, after a second-long charge, it fires 14 rounds simultaneously from the barrels in a circular-type shot in order to increase stopping power and close quarters hit probability.

A third variant, which served as the service weapon of Titan Station Security Enforcement Guardsmen, is capable of firing high explosive grenades, likely for use against clusters of hostiles or lightly armored vehicles.

The early predecessor of the SWS Pulse Rifle is featured in Dead Space 3 and is a member of the Military Engine weapons family, it functions as a faster firing alternative to the various Assault Rifle models. In this game it only has a 25-round capacity without upgrades, which hampers its effectiveness considerably and its rounds have a dramatically lower muzzle velocity then the SWS Pulse Rifle variants as the tracer rounds can actually be seen traveling down range, thus complicating the process of hitting fast moving targets at long range. Utilizing an under-barrel shotgun or grenade launcher is common with this weapon and doing so mimics the secondary fire modes from Dead Space: Extraction and Dead Space 2. Utilizing a Rivet Shotgun will most closely resemble the second variant listed above. When not aiming it the weapon appears to have its three barrels mounted side by side in a horizontal fashion but they very rapidly reorient themselves in to the familiar SWS pattern when aiming the weapon.

It comes standard with a underslung grenade launcher, though this looks very makeshift, as opposed to later model's integrated weapons or 360 fire.

The Pulse Rifle is available at the very first Store Isaac encounters and can be purchased for 7000 Credits.

Unlike the first game, the Pulse Rifle in Dead Space 2 has to be unlocked via Schematic before it can be purchased. The blueprint can be found shortly after the train sequence in Chapter 2, on a shelf at the back of the room opposite of where Isaac is after the train explodes. Once the Schematics is uploaded, the Rifle can be bought for 7000 Credits.

Towards the end of chapter 9, there is a ladder to the right of a doorway you have to take for your objective, climb up and it will be on the left.

Model preview of the EarthGov variant.

Model preview of the Agility variant.
Add a photo to this gallery

Due to the nature of Dead Space 3's Weapon crafting, the grenades do not consume the ammunition used for the primary fire, rather the primary and secondary fire have their own independent ammunition counters. Aside from a drastically altered appearance, the Pulse Rifle configuration holds considerably less ammunition per magazine than the standard Pulse Rifle from previous games. 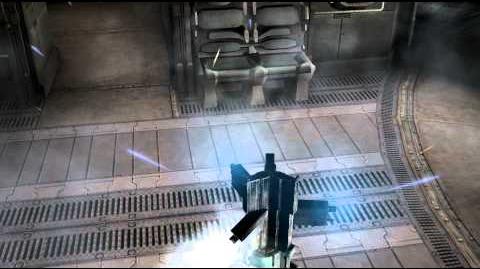 A video displaying the secondary fire for the Pulse Rifle in Dead Space. Note that this was replaced by a grenade launcher in Dead Space 2.

Normal Pulse Rifle wielded by Isaac in a Security Suit.

An advertisement for the SWS Motorized Pulse Rifle.

Concept art for the Pulse Rifle. 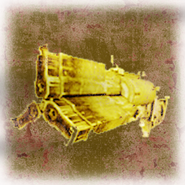 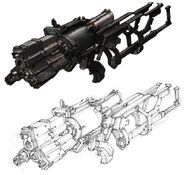 Another concept of the Pulse Rifle
Add a photo to this gallery
Retrieved from "https://deadspace.fandom.com/wiki/SWS_Motorized_Pulse_Rifle?oldid=155640"
Community content is available under CC-BY-SA unless otherwise noted.