Private Sam Ackerman was a soldier of the Sovereign Colonies Armed Forces and was present during the Necromorph outbreak on Tau Volantis in 2314.[1] He served as the Co-Op partner to Tim Caufman in the prologue of Dead Space 3.

Sam Ackerman was assigned to the 41st Engineering Unit located on the S.C.A.F. colony of Tau Volantis in 2311 in support of the archaeological and research operations there.[2] During the events of the Necromorph outbreak across the colony, Sam and the other survivors setted a defensive perimeter up in Facility RS-9 as they are convinced that they could wait the outbreak out within the safety of the bunker.

After Sam and his unit cleared the bunker of the Necromorphs, they piled the bodies and began to prepare defenses. It was not long until Sam noticed that the group's rations are spoiled, leaving them with no source of food.[2] It was suggested by one of the other survivors that they should eat the Necromorph flesh that was left over from the fighting in order to keep them alive. Sam knew that it was not a good idea and decided to stay away from the rest of the group while they ate the tainted meat.[2] While the soldiers began to transform into emaciated Necromorphs from consuming the infected flesh, Sam hid and avoided them for three days despite the infected sniffing him out at least once.

Sam managed to barricade himself into a communications room near the bunker's elevator while his former comrades begged him to let them in so they could eat him. Sam desperately sent a distress call out by looking for anyone that was still alive in the colony. His transmission was responded by Dr. Earl Serrano who asked him to link up with Private Tim Caufman on his mission to retrieve the Codex.[2] He disabled the elevator to trap them in the bunker.

"This is Private Sam Ackerman, 41st Engineering. I told them not to eat the infected. Then, they started changing. They became sensitive to bright lights. Just shining my flashlight would send them into a violent rage! I disabled the elevator to trap them down there. God rest their souls."
—Sam Ackerman

Sam met up with Tim before they both pressed forward to collect the Codex for the doctor. When their search turned up nothing after 3 hours, Sam expressed his lack of faith in the mission and thought that nothing that they did would really stop the outbreak. Despite his constant complaining, Caufman pressed forward. Caufman and Sam followed Serrano's waypoint up a mountain to a crashed ship which was the Mule. Despite being attacked by the infected members of the ship, they managed to locate and secure the Codex. The Mule suddenly started to explode from the damage that it sustained during it's crash, forcing Tim and Sam to rappel down the cliff from the ship. The ship broke apart by causing the debris to rain down on the two soldiers before also severing their rappel lines, sending them tumbling down the mountainside and dodging the falling debris. Despite initially dodging most of the flaming wreckage including a piece of the ship's engines, Sam was eventually killed by the falling debris near the bottom of the cliff.

Tim was executed by General Mahad moments later who purged the Codex's information and killed himself, believing that they truly lost their colony to the Necromorphs and failing the companions' mission until 200 years later in 2514.

Sam was foremost a cynical soldier. He claimed that the mission for the Codex was hopeless, that both he and Tim Caufman are too inexperienced for the mission and when they found ammo, he snarked that at least they could shoot one another before they froze to death. He also appeared to be very resourceful and determined as he managed to survive at least 3 days trapped in a confined bunker, hiding from his infected comrades (Who probably also included several more experienced soldiers) while having little to no food before embarking on the mission to find the Codex. 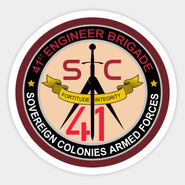 41st Engineering Unit insignia
Add a photo to this gallery

Retrieved from "https://deadspace.fandom.com/wiki/Sam_Ackerman?oldid=151883"
Community content is available under CC-BY-SA unless otherwise noted.