"That look in his eyes... Reminded me of a kid that went crazy last week. He was just an engineer, but something in him snapped."
—Nathan McNeill[1]

Sam Caldwell was a French engineer[1] on Aegis VII and one of those assigned to the Extraction Dig Team.[2]

Little was known about Sam Caldwell's early life, though he eventually joined the Concordance Extraction Corporation. At some point in his career with the C.E.C., Caldwell was assigned to Aegis 7 where he met and began a relationship with Lexine Murdoch.

Caldwell was called upon to aid in the excavation of the Red Marker. When the team removed the Marker from its pedestal, it flashed brightly and emitted a powerful, multiple-frequency wave.[3]

This powerful emission disrupted some of the Colony's equipment, deactivating the life support systems, impairing communications and damaging one of the gravity tethers. Caldwell's crew[note 2] separated from the extraction team to repair the tether.[note 3] En route, they encountered several miners and engineers who were in a highly violent state of dementia. They were forced to kill several fellow colonists, some of whom they knew, like Zochenko.

As they descended into the Megavent, Sam began to see strange Unitology-related script appearing before him only to disappear. He also began to hear voices including that of his girlfriend, Lexine.[note 4]

Upon reaching the desired level, Sterling separated from the crew to assist someone that he heard. Caldwell and Egan continued toward Gravity Tether 16.[2] Egan showed signs of dementia, eventually attacking Sam which forced Caldwell to shoot his friend. Caldwell reached the tether on his own and managed to repair it through the use of an appropriated Stasis Module.

Shortly thereafter, he managed to reach Lexine via the colony's somewhat less impaired communications system. When he was informed that the colony's life support systems are inactive, Caldwell located and successfully reactivated it. Afterward, Sam Caldwell made his way toward the lift, fighting through numerous attackers. Near the lift platform, however, Caldwell had a chilling revelation after taking down a sole attacker. He recognized the attacker as Sterling.

He continued to fight his way through, desperate to reach Lexine. He moved toward the descending lift, only to see more deranged attackers. Before he could take any action, however, one of them shot him. Fatally injured, Caldwell saw them advance only to resolve into P-Sec officers.

Shortly after learning that he was in a state of hallucination and killed his entire team, Sam Caldwell died from his injuries.

"Why'd you do it, son? All these people never did anything to hurt you."
—Detective McNeill[2] 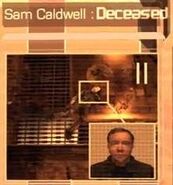 Sam Caldwell's file, as seen in Chapter 2.
Add a photo to this gallery

Retrieved from "https://deadspace.fandom.com/wiki/Sam_Caldwell?oldid=152459"
Community content is available under CC-BY-SA unless otherwise noted.