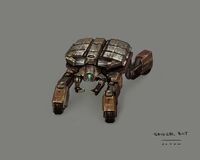 The Scavenger Bot is a robot that can be deployed or operated by Isaac to collect small out of the way items for use as resources. Small robots still perform many tasks where human technicians and larger robots cannot go (such as ventilation ducts and waste tunnels). Various military groups are suspected to have carried out surveillance and assassination missions using similar machines.

The Personality Pack DLC gives the bot their own voice and a personality. The voice is of a man, who sometimes comments on the player.

When picked up, the bot appears in the center/top "weapon" slot. When equipped, Isaac will hold the robot like a gun. If aiming, a screen will pop up to display radar showing hidden resource caches; pressing the alt fire button will cause Isaac to place the scavenger bot on the ground. The bot will then roam around slowly for a certain amount of time (10 minutes for a default bot) "scavenging" for resources or upgrades, but the differences in the resource collection rates for things like tungsten and scrap metal are unclear.

Deployed scavenger bots will recover Ration Seals, which serve as an alternate currency in the Bench microtransaction system.

Isaac can be in possession of multiple scavenger bots. They have a RIG interface page devoted to them, and upgrades such as speed are available as downloadable content. The voice pack DLC for the bot gives it a sarcastic British accent and a list of stock phrases it will use to communicate with you, though many of them seem to lack context. The practical advantage of the voice pack is that the bot has specific phrases it speaks when returning to a Bench. These can be heard through walls and from a fairly long distance when on the planet's surface and serve as a clear way of telling when a Bench is nearby. 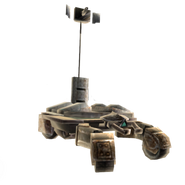 If you save and quit while a scavenger bot is active, or before you have retrieved it from a bench, it may permanently disappear from your inventory, without any way of getting it back. It is therefore advised that you retrieve any and all scavenger bots before quitting.

Retrieved from "https://deadspace.fandom.com/wiki/Scavenger_Bot?oldid=151728"
Community content is available under CC-BY-SA unless otherwise noted.