Church of Unitology
The Circle
The New Cult

A Scraper is a Unitologist enemy that appears in Dead Space 3: Awakened. They are the remnants of the Circle members who worshipped the Brethren Moons as part of their new religion.

Scrapers are insane Unitologists wearing a sack over their heads, armed with two crude claw-like contraptions grafted onto what remains of their arms. Their bodies are riddled with bloody gashes, scars and ritualistic markings, which hints at self-mutilation.

After Jacob Danik died, most of the members lost hope in the cause. However, one Circle member, convinced by a "vision" from the Brethren Moons, decided that Convergence was not at an end. He rallied up some of his supporters and gave offerings (various limbs, including their hands) to the Moons. Those who wanted no part in this were either killed or captured to have their limbs "offered" to the Moons.

The Scrapers were only encountered on the CMS Terra Nova and it is unknown what happened to the rest of the members after the Cult Leader was defeated and the ship shocked into Earth space. It is ambiguous how many Scrapers really existed; dozens of Scrapers were mentioned by Randall Carr and fought in hallucinations. However, out of the hallucination sequences, merely four real Scrapers were encountered. It is possible that only this very small number of people actually joined the new cult and Randall Carr was fooled by hallucinations as well. If more Scrapers existed aboard the Terra Nova, presumably some of them died with the blast that took place near the engine. 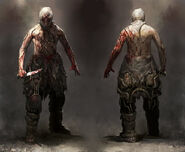 Concept art for the cultists.

Render of a Scraper.
Deutsch
Community content is available under CC-BY-SA unless otherwise noted.
Advertisement