"The Seeker Rifle is a riot control device that is meant for accuracy at long-range. It packs a punch but is slow to reload. Use the alt-fire to zoom in with the scope for even greater damage."
—Dead Space 2 Manual

The Seeker Rifle is a powerful sniper rifle capable of delivering long-range fire. It can sever limbs if properly aimed and can pull off headshots, leaving Necromorphs swinging around blindly while you fire away. Its secondary function provides an enhanced zoom, thus allowing even greater precision and damage. In Dead Space 3, Seeker Rifles can be crafted without a scope.

When aimed with the scope attached, the player's view will be automatically magnified. 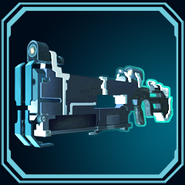 The "Peek a Boo" achievement/trophy