The Shotgun is a weapon that appears in Dead Space 3. The weapon must be built at a Bench after finding the blueprint.

The Shotgun has high initial damage offset by a low rate of fire and a long reload time, but it's capable of knocking Necromorphs down (and even killing some instantly) with one well-aimed shot, or with upgrades.

It is effective when multiple enemies/Necromorph weak points are clustered together, as a single shot is capable of shredding many targets with its extreme firepower.

The blueprint for this weapon can be found during Chapter 4. Once you find the Repair Bay at the end of the Crew Access corridor, go through the door on the left.

The shotgun is effective at close to medium range and can cause tremendous damage to human and necromorph foes alike.  It is well-suited for use as a primary weapon, especially when upgraded to overcome its main shortcoming: a slow rate of fire.  When paired with a long-range weapon - like a javelin - you can create a weapon that is useful in nearly any situation. You can also specialize it for close-range combat with a force gun that will keep your enemies at optimal range.

The upper tool of Shotgun consists of a Military Engine with a Conic Dispersal upper tool tip. This produces a reliable shotgun.

There is no lower tool of Shotgun. However, if you build the Shotgun out of parts you find throughout the levels, you can add a lower tool. A good choice for the latter would be the Rocket Launcher. Both of them need just one or two circuits to maximize the damage. That way, you can concentrate on upgrading the clip and rate of fire for both weapons. The Heavy Elite Frame comes with all 8 circuits unlocked, so if you have one, use it instead of the Heavy Standard Frame, as you can save precious tungsten that way. If you plan on using the Shotgun/Rocket Launcher combination, it is mandatory to have the Safety Guard attachement. That means you can use the Rocket Launcher at point blank when overwhelmed by Necromorphs, with devastating results. The Shotgun could benefit greatly from Fire or Acid attachements. 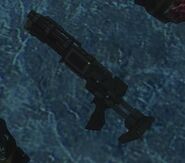 A view of a dropped shotgun.

Another angle of a dropped shotgun. 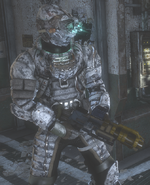