Dead Space Wiki
Register
Don't have an account?
Sign In
Advertisement
in: Pages with reference errors, Articles with Spoilers, Organizations,
and 2 more
English

The Sovereign Colonies were the predecessor to the Earth Government Colonial Alliance, a united ruling body encompassing Earth and its colonies that lasted until the early 24th century. The Sovereign Colonies were dissolved following the disastrous events on Tau Volantis and the decision to destroy all Marker-related research and eliminate anyone with ties to the project. The extent of the containment operation effectively nullified the Colonies' ability to continue the Secession War against the rebels. In the vacuum left behind, the secessionists seized power and formed an Earth-centric government.[1]

The Sovereign Colonies were the united government of human space that formed in the wake of mankind's expansion to space after a string of global social calamities caused by post-21st century armed conflicts, specifically, the Bering Sea conflict, and environmental catastrophes known collectively as the Global Warming Epidemic.[2] Without shockpoint drives, space travel was limited and required large investments of money and materials.[3] Another problem was the constant resource shortage, limiting the ability to expand and support the population. Discovery of the Black Marker in the Yucatán in 2214 defied scientific understanding and gave hope for the beleaguered humanity. Despite the death of Michael Altman and the riots that followed, research into the Marker promised an end to humanity's resource crisis.[4]

However, research required time that the Sovereign Colonies did not have. The resource-stricken populations proved susceptible to manipulation by secessionists seeking to form an Earth-centric government. Hostilities steadily escalated, from rioting on Earth[5] to open war. The Secession War, as it was called, pitted Colonies against the Secessionists, consuming men and resources at a steady pace. The conflict steadily consumed the ranks of trained legionaries, eventually forcing the Colonies to rely on conscription.[6]

By 2311, the Sovereign Colonies were in a critical situation, with both public support and the ability to wage war dwindling. The discovery of Tau Volantis thanks to the Ptolemy Station was a final attempt to turn the tide of the war in their favor. The Galactic Expedition sent to the planet drew resources and men away from the war effort, hoping to find the source of limitless energy received by the Markers. This, in turn, could resolve the resource crisis and give the Colonies the upper hand against the Secessionists.[7][8]

Unfortunately, reality proved to be quite different. What the Expedition uncovered was nothing short of an existential threat to humanity and the Sovereign Colonies Council decided to invoke a Scenario Five response, destroying all research related to the Markers, eliminating all personnel tied to it, and otherwise burying all knowledge related to the project. The extent of the purges and destruction nullified its ability to continue the war and losing to the Secessionists, who dismantled the Sovereign Colonies administration, and established an Earth-centric, centralized government in its place.[1] Neither the Secessionists nor EarthGov were aware of the reasons behind the widespread destruction of materiel across Sovereign Colonies' territory. The accepted explanation in military circles was that the Colonies were simply implementing scorched earth tactics, preferring to scuttle their fleet, rather than hand it over to the victors.[9]

According to Damara Carver, the Sovereign Colonies experimentation with the Black Marker predated all of the major projects involving the Earth Government presumably by two centuries.[11] Red Markers, man made copies of the Black Marker, were stationed on planets such as Kreemar, Aspera and Aegis VII.

In 2311, studies of three Red Markers at Ptolemy Station led to the discovery of a “Master Signal” that originated not from the Markers themselves, but from a planet in deep space, later known as Tau Volantis.[11][12] Accompanied by the Sovereign Colonies Armed Forces, Earl Serrano and the Science Division spearheaded the expedition to the planet in the hopes of recovering alternative resources for the war and the general populace itself.

During the expedition, the excavation of alien artifacts and the Markers that resided beneath the planet's surface began to affect the crews tasked with studying them.[13] Eventually, the growing dementia[14][15][16][17] and deaths caused by the strange life form never before encountered on the planet overwhelmed the expedition.[18]

In 2314, Scenario Five, a first contact situation authorized by the Sovereign Colonies Council, was carried out. All of the personnel were killed to prevent the spread of the life form to Earth and any information that could be found on the Science Division's experimentation with the Markers and the expedition's research was destroyed. The combined loss of the expedition and the war saw the final end of the Sovereign Colonies once and for all.[18][19][20]

The Sovereign Colonies possessed their own fleet. It relied predominantly on large ships capable of interstellar travel, as the technology in the 2200s and 2300s was a lot more primitive than modern shockpoint drives that emerged in the subsequent two centuries. Larger ships would carry smaller ones during transport (e.g. the CMS Terra Nova, which had a cradle designed specifically for this purpose), together with ground forces.

Outside the Navy, the Sovereign Colonies had a sizable regular military, whose members were commonly referred to as Legionaries.

The Galactic Expedition to Tau Volantis, although ostensibly an archeological one, was a full-scale military operation with numerous capital ships involved. After Scenario Five and the scuttling of most of the Colonies' fleet, the Galactic Expedition flotilla remained one of the only intact remnants of their space military — conquered by the same Necromorph infestation as the ill-fated planetside expedition colony and was left in ruins for nearly 200 years before Isaac Clarke and his team arrived in search of Ellie Langford and her team. 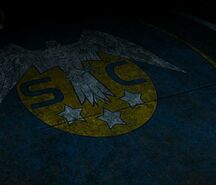 The Sovereign Colonies logo in blue.