Dead Space Wiki
Register
Don't have an account?
Sign In
Advertisement
in: Pages with reference errors, Articles with Spoilers, Organizations,
and 2 more
English

For a list of assets on Tau Volantis, see this article.

During the early 2300s, the Armed Forces were embroiled in the Secession War with the Secessionists, seeking to form an Earth-centric government.[2][note 1][3]

In 2311, the Science Division of the Sovereign Colonies successfully completed experiments on three Red Markers, copies of the original Black Marker. They discovered that the signals being broadcasted by their copies came not from the Markers themselves, but from a signal out in deep space.[4][5] Triangulating the signal using Ptolemy Station, they discovered Tau Volantis. Seeing this as a chance to bolster the flagging war effort and galvanize support, the Sovereign Colonies Council approved of an expedition to the planet to discover the source of limitless energy powering the Marker replicas.[6] The flotilla was led by Admiral Marjorie Graves, the Armed Forces by Major General Spencer Mahad and the Science Division by Dr. Earl Serrano.[7][8]

On August 29, 2311, an initial drop zone was established. As the Armed Forces set up on the planet, precautions to deal with the harsh environment are made.[9] The Armed Forces set up a series of ground-based barracks, research facilities and drill sites under Mahad's authority. Graves and the flotilla remained in orbit to provide support to the research teams working on the ground.

Serrano and his team identified a massive alien city underneath the base and began excavation. Inside, they found frozen specimens of alien origin and a host of Red Markers, varying in size.[10] The Science Division members began their excavation of the Markers, alien artifacts and remains. Dr. Alexei Obauchev began neurological dissections on the aliens in an attempt to better understand their physiology.[11]

Serrano and his team managed to piece together a number of details about the Machine, aided by the neurological data retrieved from the Rosetta and Nexus specimens. It was the source of the massive energy readings detected from the Markers. Trying to determine how to use the Machine, Serrano and his team created a Codex, a device that would work in conjunction to the machine.

While Serrano and his team worked on building the Codex, the conditions at the Armed Forces facilities were deteriorating. The members of the flotilla began to exhibit symptoms of Marker influence including headaches, lack of focus, hallucinations and Dementia.[12][13][14][15] The bodies of the dead soldiers who experienced the same symptoms are brought aboard the ships for "safe keeping" alongside the artifacts and Markers. Serrano's dig team was affected by the Marker in such a way that they adorned their snow suits with Marker symbols.[16][note 2]

Despite Mahad's misgivings, Graves ordered that the expedition would continue. Soon thereafter, Admiral Graves was sequestered to her quarters under quarantine. She claimed to hear voices telling her to "Turn it off"[6] Mahad declared Graves unfit for duty and took command of the entire expedition.

Adding to the stress of the situation was a steadily growing hostile organism of unknown origin, later dubbed the "Necromorphs" by the Science Division, both within and outside the Armed Forces base.[9] Food supplies and rations began running low. Desperate and starving, soldiers supplemented their diet with infected flesh. Alexei Obauchev's research on frozen alien samples recovered from Tau Volantis's ice packs involved using the corpses of infected Armed Forces soldiers who were killed after volunteering for the project to thaw the specimens.[11]

On June 17, 2314, with the situation quickly spiraling out of control, Mahad and his staff were ordered by the Sovereign Colonies Council to eliminate the threats presented by the Markers as per the "first contact" scenarios: Destroy all of the research and kill all of the staff on and off the planet who are attached to the Armed Forces facilities on Tau Volantis.[11][17][18][19]

Dr. Serrano who sought refuge in the alien complex beneath the base discovered a terrible truth about the nature of the Machine. Turning it off would lead to the extinction of all life in the galaxy and the restart of the Convergence Event that would complete the dormant Brethren Moon above Tau Volantis.[6][20]

Graves' plea to "Turn it off" was actually a message from the Moon needing to be completed. Serrano, however believed that the aliens intended for the Machine to destroy the Moon entirely, stopping the Marker signals that are now spreading throughout space. Theorizing that the device had to be properly attuned to accomplish this, Serrano prepared to activate the Machine himself. However, a broken leg left him immobile. Without the Codex, Serrano was unable to complete the process. Desperate, he contacted Tim Caufman and Sam Ackerman, still on the surface and begged them to recover the Codex from a crashed ship and bring it to the lab. However, Ackerman was killed and Caufman's attempt to reach Serrano was foiled by Mahad who killed him. Purging the Codex of its information, Mahad then committed suicide. By June 18, 2314, virtually all of the Armed Forces and Science Division crew are dead. The flotilla was left in ruins and the colony was abandoned.

The only known survivor was Lt. Tucker Edwards, who both refused to kill himself, as well as killed his superior officer, CPT Valery Dietz , in self-defense. Locking himself away in, and heavily booby trapping, the Conning Tower of the CMS Terra Nova. However, Edwards would also finally comply with the order roughly 10 years later, having succumbed to loneliness and isolation, and killed himself in the apex of the tower.

The failure of the Tau Volantis expedition and the subsequent execution of Scenario Five across the Sovereign Colonies crippled the war effort and the Colonies lost the Secession War in short order.[21] The widespread scuttling of SCAF vessels was taken to be a scorched earth tactic by the victors.[3] All of the knowledge of the Tau Volantis and Marker research conducted by the Sovereign Colonies was lost or destroyed to prevent the infection from spreading.

Almost 200 years later, in 2508, one of the S.C.A.F.'s Red Markers, Marker 3A, was discovered on Aegis VII by the crew of the USG Ishimura. Six years later in 2514, Damara Carver, a data archaeologist, discovered fragmented information of the mission of Tau Volantis.[5] This lead to a small team traveling to Tau Volantis in an attempt to stop the influence of the Markers, retracing the steps of the doomed expedition and using the S.C.A.F.'s remaining equipment/facilities. The Marker Team managed to complete Serrano and Caufman's mission, fully activating the alien machine to kill the Bretheren Moon orbiting the planet. Later, in order to return to Earth, the remaining members of the team, Isaac Clarke and John Carver, managed to repair the CMS Terra Nova and shocked out back to Earth.

The armed forces of the Sovereign Colonies were comprised of two primary branches: The Navy, as the principal spacefaring component, and the Legion, its planetary component. The two cooperated closely in carrying out military operations, from the Secession War to the fateful Galactic Expedition to Tau Volantis. The shared supply chains made logistics simpler and easier to maintain over the long term, especially providing food, water, and other essentials for thousands of soldiers deployed across the known space. The humble MRE was an example of this philosophy in practice, with the same, standard MREs provided to Navy and Legion servicemen, shipped in bulk and offering a broad variety of meals in a durable, lasting package, including chicken, vegetarian meals, pre-packaged potable water, and more.

Tasked with operating the space component of the Sovereign Colonies military, the Navy was chiefly responsible for operating its spaceships, organized into Fleets and Flotillas under the command of an Admiral (Marjorie Graves in case of the Galactic Expedition). Enlisted members of the Navy wore distinctive buttoned-up khaki overalls with the Navy device on the upper left breast, and badges on each arm. A RIG is mounted on the back, above a utility belt. Officers wore more complex, decorative uniforms with epaulets, lanyards, and decorative cuffs.

All SCAF spaceships followed strict regimentation to make full use of limited space onboard its vessels. Most personnel had to make do with cramped quarters, but officers had a number of privileges, including priority access to the mess (enlisted personnel was obligated to make space for officers), while the largest ships like the CMS Roanoke had officer lounges and spacious offices for its highest ranking leaders.

The Armed Forces flotilla was tasked with journeying out into deep space to locate the "Master Signal" being received by the Markers created by the Sovereign Colonies. The flotilla was a large space fleet with numerous military ships and research vessels which were commanded by the CMS Roanoke during the expedition.

The terrestrial component of the SCAF, working in close cooperation with the Navy. Legionaries were some of the most fearsome warriors of human space during the Secession War, but a combination of strategic error and loss of public approval for the war effort rendered their fighting capabilities null in the long term.

All SCAF personnel were issued a duty uniform, dress uniform, and combat uniform. The standard combat uniform for the S.C.A.F. was the Legionary Suit , which included standard RIG integration. More specialized units were issued custom variants of this suit. Members of the Science Division's archaeological team were issued snow suits with puncture resistant microfibers. Likewise, personnel such as the Deep Dig team were issued Arctic Survival Suits , as well as a variant of the Legionary Suit modified for increased radiation shielding to protect against the higher radiation from the planet's mantle: the Hostile Environment Suit.

The standard long arm of the S.C.A.F. was the Bullpup Rifle. While S.C.A.F. had access to Pulse Rifles, the technology was still cutting edge at the time, thus was only issued to highly specialized troops, such as the 401st Marauders. Sharpshooters, such as the Snake Bites, were issued SMP-90s. The Deep Dig team on Tau Volantis were issued a semi-automatic carbine with an underslung model 2100 "Big Boy" shotgun, which would come to be called the Evangelizer, instead of the standard rifle. The only know side arm used by the S.C.A.F. is a powerful Revolver.

During their research on the Markers, the S.C.A.F. used vehicles such as MU90 L400 tractors on Tau Volantis, as well as an E-34 Elephant Drilling Rig on Aegis VII. The S.C.A.F. also used ANG-3 Scavanger bots. Other pieces of equipment shown to have been used by the SCAF include: AAAA electrical generators, Nex-Gen 3000 generators, Warfind Audio 185 Strata Message Systems, EEI Electrical Engineering Interfaces and UX150 access chambers. 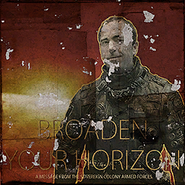