"Spitters" are the term invented in Dead Space 2 for Slashers created from female hosts. As their name suggests, the primary difference between female and male Slashers is that the females have the ability to spew acidic projectiles across short distances, leading to their new name. These creatures existed in the original Dead Space, complete with acid-spitting ability, but did not receive the 'Spitter' designation until Dead Space 2.[1]

Like male Slashers, Spitters have large, bladed arms protruding from their shoulders, along with their intact original arms.

In Dead Space, like the later installments, the Spitters are female. Their green toned uniforms remain intact and they are the least mutilated looking Slasher. The only major modifications to the host's body are the blades protruding from their hands, flesh hanging from their arms and head having ripped from the body and connected by a new pink, fleshy neck. These ones mostly rely on close quarters combat and will only spit if their route to the player is blocked.

Their Dead Space 2 counterpart not only has an entirely new model, but utilizes its spitting feature more and will not hesitate to bombarde the player. This new design is a little more gruesome as the upper back has ripped open for new bladed arms made entirely of mutated flesh along with exposed ribs. The host legs and waist are intact albeit covered in blood, the host arms are also intact, having been repurposed to hold open the chest. The split chest reveals lungs which have been repurposed and expanded to make and spew bile bombs. The host's mouth has split open to accommodate a new jaw much like the Leapers. Lastly, the host's neck appears to have burst open, exposing an enlarged esophagus connecting from the new mouth to the transformed lungs. The Spitters appear to be completely naked compared to the counterpart from the first game.

Appearing in Dead Space 3 and Dead Space 3: Awakened, the Spitters have taken on their most gruesome appearance yet. Following the style of the other necromorphs, many new arms sprouted on various parts of the host's body. A new head which is rimmed with long pointy teeth all around the mouth and a pair of bladed limbs,have erupted from the upper back, at the base of the neck and have pushed the host's head to the side frozen in a frightened state. It is hard to tell which of the many new arms is the hosts's original but the legs remain having lost much mass and many lacerations and openings are present. The lungs have also been pulled from the main body and now reside next to the host's head, intertwined in transformed tissue.

In Dead Space 2 Multiplayer, the Spitter has an eight-second respawn timer. This high respawn timer is due to the high value these Necromorphs provide. They are essentially the snipers of the Necromorph team. They are somewhat efficient at melee combat but best at range. Like the Puker, they have a chargeable spit, which is more direct and singular unlike the Puker's spray. This spit, when charged fully, can completely decapitate a full health human if aimed at the head. The best strategy to use when playing a Spitter is to hide around corners, like the Puker, and aim a headshot on upcoming enemies.

Spitters have attacks similar to both male Slashers and Pukers. From a distance, they will spit a fast glob of acidic bile at Isaac. Up close, they will slash at Isaac with their blades, as well as attempt to grab him.

Spitters tend to be loners, but can be accompanied by Pukers or other Slashers, attacking from a distance while other Necromorphs close in, making Spitters a priority to take out first. Although their ability to spit can make them troublesome, Spitters can be killed in the same fashion as Slashers: by cutting off both of their arms with a weapon like the Plasma Cutter or the Line Gun. You can also use Stasis from a distance in order to counteract the threat of it spitting at you. Even then, like the Puker's long-range attack, a Spitter's bile can be caught with Kinesis and thrown back, resulting in an instant kill. Also, shooting off its head or legs will take away her ability to spit altogether. Later in the game, Spitters tend to spit more instead of charging.

If Isaac fails the action sequence, then the Spitter will bite his head off. If he succeeds, Isaac will push the Spitter away and punch its head off with his gun. This death scene is shared in Multiplayer, but no decapitation.

Concept art with a male body.

Concept art of the Spitter's face.

Spitters in combat with Security Guards.

Featured in the Multiplayer Trailer. 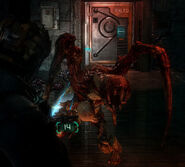 Better view of the 2 heads